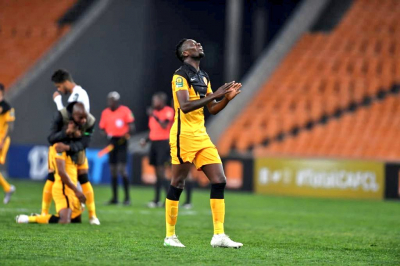 Kaizer Chiefs will have the chance to join rivals Orlando Pirates and Mamelodi Sundowns as CAF Champions League winners when they face Al Ahly in the 2020-21 season final in Casablanca, Morocco on Saturday night.

Chiefs have upset the odds all the way through their CAFCL campaign. They scraped through the preliminaries before edging out Horoya AC by the finest of margins (away goals on head-to-head count-back) to advance from the group phase, survived a storming comeback attempt from Simba SC in the quarterfinals and then defeated Wydad Casablanca 1-0 on aggregate in the semifinals.

"We’re just going to enjoy every moment of it because we’ve come a long way to be where we are," said Chiefs player Lebogang Manyama.

"We should be very, very proud, but we want to go as far as taking [the trophy] and putting a star on our jersey.

"That would mean a lot because every Kaizer Chiefs fan deserves this after the rough times we’ve had without winning a trophy, and now all of a sudden, we’re competing for the biggest one on the continent. We have to do this for the badge."

Chiefs took on Al Ahly in the 2002 Caf Super Cup after the Soweto giants clinched the African Cup Winners' Cup, while the Red Devils had being crowned 2001 Champions League winners.

The Red Devils proved too strong for Amakhosi as they claimed a 4-1 win in a match which was played at Alexandria Stadium in Egypt and it remains the only meeting between the two clubs.

Al Ahly, however, head into the match as heavy favourites. The Egyptian giants, managed by South African Pitso Mosimane, had a minor slip by not finishing top of their group but then emphatically ousted Mamelodi Sundowns (3-1 on aggregate) and Esperance de Tunis (4-0 on aggregate) in the quarter- and semifinals respectively.

The Red Devils are the reigning African champions and will be seeking a record-extending 10th continental crown, while they also have the advantage of being in playing rhythm: Ahly have racked up four domestic league matches since the second leg of their semifinal in late June, while Chiefs have not had the chance to play any competitive fixtures and could well be rusty heading into the final.

Mosimane has admitted that it will be strange coming up against a South African side, but he is fully committed to guiding Ahly to yet more CAFCL glory.

"I am a South African playing against my home team, a team I supported when I grew up. At this time, it is about me, my family and my team [Al Ahly]. They come first, "said the former Sundowns coach.

He added, "We are not a welfare or charitable organisation handing out stars. Everybody must earn it. Al Ahly want to win their own ‘la decima’ [10th title], they call it the ‘El Ashra’ here, and Kaizer Chiefs want to get their own star."

Kick-off at Stade Mohamed V is scheduled for 9pm CAT and will be broadcast live on SuperSport and SABC.

Twitter
More in this category: « Matt Dawson says 'the wheels are off' if Lions lose against Stormers. Bafana Bafana through to the finals of the Cosafa Cup 2021. »
back to top