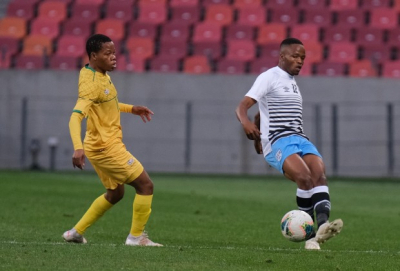 Bafana Bafana progressed to the 2021 COSAFA Cup final with an impressive 3-0 victory over Mozambique at the Nelson Mandela Bay Stadium on Friday.

Njabulo Ngcobo opened the scoring with an excellent header before Yusuf Maart scored a sensational second in the 59th minute. Victor Letsoalo then wrapped up the tie with a 73rd-minute penalty.

Bafana played the same starting eleven against Mozambique that beat Lesotho convincingly 4-0 in their second to last Group A game.

However, Mozambique started the brighter of the two sides in this clash, leaving Bafana chasing the early ball and giving away a couple of unnecessary set-pieces.

Rushine De Reuck was quickly across to deny Tesoura Junior as he looked to latch on to a neat forward pass from Nilton Ernesto, for the first real chance of the match.

Victor Letsoalo just overhit a pass for Sphelele Mkhulise while Monnapule Saleng was denied on the edge of the Mozambique box by a strong challenge from Martinho Thauzene as Bafana came more into the game.

Joaquim Mapangane had Veli Mothwa scrambling with a shot from the edge of the area on 14 minutes that flew just over the target.

A firm Maleng free-kick minutes later then broke the Mozambique wall, but despite a deflection, the ball did not get past Hernani Siluane in the away goal.

Saleng forced Siluane to punch clear a 21st-minute free-kick that the player swung dangerously into the Mozambican box, as Bafana continued to threaten from an increasing number of their own dead-ball situations.

And they were deservedly ahead on 24 minutes as Ngcobo got in front of his man to head home a well-struck free-kick from the left side from Siyethemba Sithebe, for his first international goal.

Mozambique responded with some good attacking football and dangerous deliveries from wide areas, but Mothwa and Bafana held strong to take the advantage into the half-time break.

There was an open feel to the start of the second period with both teams spraying passes around.

Siluane was brought into action just moments later with a near-post save to keep out Letsoalo. But despite the ball being acrobatically cleared, it only landed at the feet of Maart - who still had a lot to do - but somehow curled a superb shot into the top right-hand corner of the goal, from the left-hand side.

South Africa was then handed the chance to put this tie to bed with Letsoalo brought down in the penalty area by Mapangane, and in-form Letsoalo followed up his hat-trick against Lesotho on Tuesday with another goal, this time from the penalty spot.It moves him to the top of the scorers charts.

Bafana made a double change in the last five minutes, as Thabang Sibanyoni replaced Mkhulise upfront and Ethan Brooks came on for Maart in midfield, as the hosts held on to a comprehensive win and will face guest nation Senegal in the final while Mozambique will play Eswatini in the third/fourth place play-off, both on Sunday afternoon.