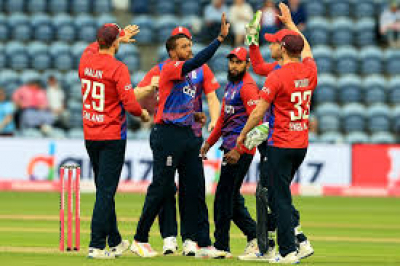 Liam Livingstone's spectacular century was not enough to prevent England from being beaten by Pakistan in a riotous first Twenty20 at Trent Bridge.

With the hosts chasing 233 - what would have been their highest T20 pursuit of all-time - Livingstone reached 50 from 17 balls and 100 from 42, both England records.

He went to three figures with his ninth sixth, but was out next ball, a crucial swing of momentum towards Pakistan.

The tourists had earlier racked up 232-6 - their highest total in a T20 - taking advantage of a superb pitch and short boundaries on a sun-kissed evening in Nottingham.

Captain Babar Azam struck 85 from 49 balls and Mohammad Rizwan 63 from 41.

England were ragged, dropping catches and too often missing the mark with the ball to concede their highest score for eight years.

Livingstone's incredible knock kept England in it, but they were eventually bowled out for 201 in the last over to lose by 31 runs.

The second game of the three-match series - at Headingley on Sunday.

England's Liam Livingstone: "We've spent 10 days in isolation. It was nice to have that break and I came back in feeling really fresh. I didn't pick a bat up for 10 days then came back in yesterday and felt really good."

England captain Eoin Morgan: "It was an incredible knock. The biggest compliment I could pay him is our changing room has watched some incredible knocks from Roy or (Jos) Buttler or Ali and that knock was as good as any of them. He was incredible."

Pakistan captain Babar Azam: "Everyone took part in today's win. After mine and Rizwan's partnership all the batsmen came and performed their roles and we got a brilliant total.

"We want to carry on the momentum on to the next game and take the positives from today."