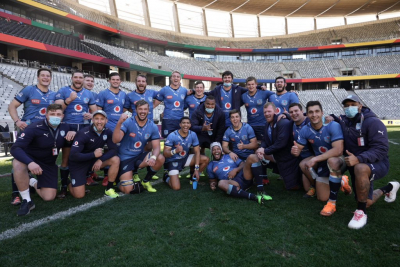 The Vodacom Bulls scored 17 unanswered second-half points to claim a 17-14 victory over South Africa A with a week to go until the first Test of the Lions series.

South Africa A got off to a flying start as they camped in the Bulls’ 22 for the opening 10 minutes and opened the scoring in the 11th, when Cobus Reinach sniped around a breakdown and broke a tackle before popping a pass to put Aphelele Fassi in for a try.

In truth, the Bulls were largely dominant in the first half and had the better of possession and territory. They spent a long period of their own in the SA A 22, where they won a trio of penalties and saw their opposition reduced to 14 men when Wandisile Simelane was yellow-carded for repeated infringements.

The first half was largely lacklustre, with both teams making plenty of handling and passing errors. Neither side had it all their own way at the set piece either, but the Bulls had the better of the scrums, with Jacques van Rooyen giving Coenie Oosthuizen a torrid time.

Despite struggling for any continuity, SA A extended their lead just before the break, when Rosko Specman set up Simelane for a simple dive over the tryline.

South Africa A grew into the match in the second half, despite Jacque Nienaber ringing the changes. However, a quick one-two punch had the Bulls levelling the score with two tries in a couple of minutes. First, Johan Goosen broke the line and put Keagan Johannes under the poles, before Johan Grobbelaar finished off a wonderful flowing move to tie matters up with 12 minutes on the clock.

Chris Smith, who replaced Goosen in the final 10 minutes, then slotted a long-range penalty to put the Bulls ahead.

SA A had a late chance to claim a win, with a quick-tap penalty five metres from the Bulls tryline, but the ball was lost forward and Bulls captain Nizaam Carr was able to boot it into touch to claim the victory.

Meanwhile Argentina completed a series victory over a depleted Wales side with a convincing victory in Cardiff.

Elsewhere Noah Lolesio kicked a last-minute penalty as Australia recovered from an early red card to beat France 33-30 and claim the three-Test series 2-1.

Baptiste Couilloud and Cameron Woki scored tries for the visitors as Tate McDermott and Lolesio crossed for the hosts with the game tied at the break.

The Wallabies' ninth consecutive win at Suncorp Stadium in Brisbane ensured they won a tight series, in which the previous two games had both been decided by two points.