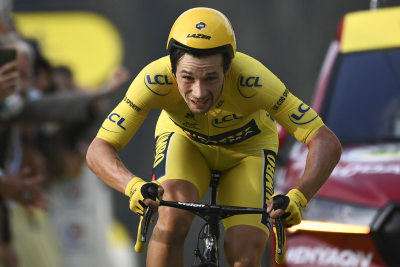 Tadej Pogačar (UAE Team Emirates) will win the 2021 Tour de France in Paris on Sunday after safely defending his lead on the stage 20 time trial.

The Slovenian finished eighth on the stage, just shy of a minute from the victory, having ridden a fairly cautious time trial to avoid any late accidents that might ruin his carrying the yellow jersey onto the Champs-Élysées tomorrow.

Wout van Aert (Jumbo-Visma) took victory on the stage, his second of the race, setting a top time of 35-53 on the 30.8km course in southwest France.

Van Aert's team-mate Jonas Vingegaard sealed second overall on his Tour debut and third on the stage, cutting his deficit to Pogačar from 5-45 to 5-20. Richard Carapaz (Ineos Grenadiers) meanwhile will finish third overall at 1-43 behind Vingegaard, having started the stage with a six-second deficit to second place.

"I'm super happy to finish - it went so fast. There was so much support on course, I was just enjoying every moment though I was suffering as it was super hot," said Pogacar.

"I cannot describe it. I was going flat out but it was totally different to stage five [another time trial, won by Pogacar] where there was much more adrenaline. But today I did my best - I was prepared, but not as good in the legs.

"I cannot compare - last year was something else. This year is just different."

The time trial took place on a hot day near Bordeaux, and for many tired riders, it showed.

Ineos Grenadiers' specialist TT rider Geraint Thomas - who sacrificed any chances of a potential overall win after a crash much earlier in the three-week race - came home 37th.

"You've got to go all in. I had a good team around me. Don't get me wrong there's been some dark times."

Pogacar's performances in the lead-up to the Tour have been imperious. He has single-handedly beaten a string of in-form riders - several of them from Ineos, including Adam Yates at the UAE Tour in February.

Twitter
More in this category: « Bulls edge South Africa 'A in their Castle Lager Lions Series clash. Lions impress as they see off Stormers ahead of first Test against Springboks. »
back to top