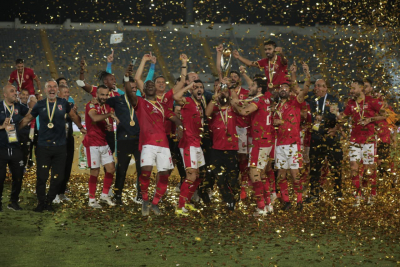 The Red Devils have lifted their tenth CAF Champions League title after thrashing Kaizer Chiefs 3-0 in the final at the Stade Mohammed V in Casablanca.

Only Four clubs in African history have won more CAF Champions League titles than Mosimane as the South African is now one away from equalling Manuel José’s record.

Speaking after the game, Pitso said: "We really needed to win this tournament and I think Kaizer Chiefs was good in the first half until the sending off, but it’s part of football.

"We are now waiting to go back to the World Cup. Last season, we won a medal and we played against Bayern Munich, and I think the adventure is great for us.

"We beat the South American champions and I don’t know why we play more matches than them, FIFA must reconsider this matter.

"When you win, you must be humble, because when you lose, people must remember that you were humble when you won before.

"Everything Baxter did, we predicted. We were able to follow Kaizer Chiefs through the team of analysts inside the club, and we were able to play in the usual way for us."

"I respect Kaizer Chiefs. I respect Gavin Hunt who led the team to the semi-finals because he doesn’t get the praise he deserves and I praise Baxter for leading the team into the final."

"I played against a team that I supported when I was young, which is Kaizer Chiefs. I was raised near the club and I have great respect for the club, and no club qualifies for the Champions League final easily.

"I would like to dedicate the title to Mahmoud El-Khatib because he trusted and believed in me, instead of going to Europe to bring in a European coach, but he believed that an African coach could achieve the success that a European coach does.

"Africa has the resources to make good football, instead of big clubs bringing coaches from Europe, they should support African coaches.

Meanwhile Baxter told the reporters "I thought with the challenges that we’ve had building up to the final, the players did really well."

The opening of the game, we pressed high, but al Ahly were good with the ball.

"I thought we did that reasonably well, but we had less and less of our attacks.

"The red card turned out to be the killer, I had to change the game. The second half they put the gas to the floor, the same time we had the hand brake on."

Twitter
More in this category: « Bucks hold off Suns late in thrilling Game 5 to move one win from NBA championship. South Africa's U23 Olympic team reports three COVID-19 cases. »
back to top