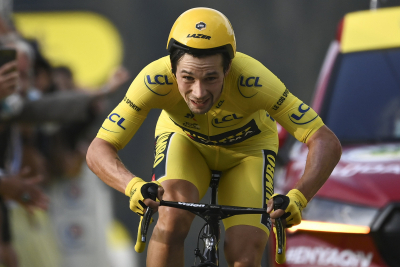 Mark Cavendish failed in his bid to set a new record of 35 stage wins in the Tour de France as Wout van Aert won the final stage of the 2021 Tour.

Cavendish struggled to find space and could not come past Van Aert in the final few metres of the bunch sprint on Paris' Champs-Elysees.

But the 36-year-old had already won four stages this year to equal the Tour record of 34 set by Eddy Merckx.

The fairytale ending to this Tour was not to be, but this will still go down as a remarkable performance from Cavendish.

Despite his failure to take sole ownership of the stage wins record, to have drawn equal with Belgian legend Merckx is an astonishing achievement by Cavendish, who had struggled for form for several seasons and feared last year his career was over.

He was only called up by Deceuninck Quick-Step as a late replacement for injured Irish sprinter Sam Bennett.

But, a full five years after his previous Tour stage win, his sprinting dominance earned him his second Tour de France green jersey, awarded to the winner of the points classification.

As history beckoned, Van Aert had joked he would do his best to defend Merckx's record for Belgium, and though he could not stop Cavendish equalling it, the Jumbo-Visma rider was there to make sure it was not broken on the Champs-Elysees.

The stage win added to the remarkable salvage job Jumbo-Visma have done in this Tour after losing leader Primoz Roglic in the opening week - having now won four stages and taken second overall through Jonas Vingegaard, all despite only finishing with four riders.

"This Tour has been amazing," said Van Aert, the first man since Bernard Hinault in 1979 to win a mountain stage, sprint and time trial at the same Tour.

"It's been such a roller-coaster and to finish off with a win like this is beyond my expectations.

"I guess I gave myself a problem because I have to catch a flight tonight [to the Olympics] and all these interviews will take a while, I will have to see if I can get there but I'm definitely not sorry that I went for it today.

"To win three stages like this is priceless, so thanks to my small team."