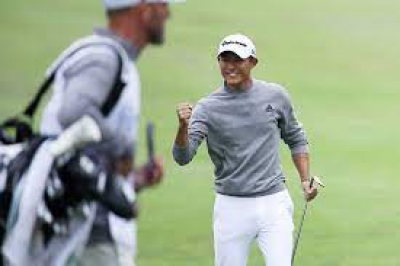 Nerve-less Collin Morikawa shot a scintillating bogey-free final round to clinch the Claret Jug on his Open Championship debut as returning fans soaked up the victory at a sun-drenched Royal St George's.

The American wrestled hold of the lead with three birdies to finish the front nine and held off the charging Jordan Spieth to win by two strokes on the Kent coast.

The 24-year-old, who won his first major on his US PGA Championship debut last year, becomes the first Open debutant to win since Ben Curtis did so at this course in 2003.

Morikawa's four-under 66 saw win on 15 under, with 2017 champion Spieth also recording a final-day 66 to finish as his fellow American's nearest challenger.

US Open champion Jon Rahm birdied four of his last six holes in a 66 to finish joint third on 11 under with overnight leader Louis Oosthuizen, who closed with a 71.

Up to 32,000 spectators flooded through the gates on Sunday and were treated to a blockbuster final round as the only players to make the cut in all four of this year's men's majors finished as the top four in Sandwich.

It was a fitting finale at Royal St George's as the venue belatedly got to hold the 149th edition of golf's oldest major after last year's championship was cancelled because of the Covid pandemic.

Shane Lowry's victory at Royal Portrush two years ago was beginning to feel like it hailed from a different era when sport was locked down and, while six majors have since been played in the US, this was the first to be staged on this side of the Atlantic Ocean since the Irishman's iconic victory in 2019.

Rain before the tournament thickened up the rough and provided receptive fairways and forgiving greens, but that meant once the wind dropped players were able to shoot low scores on Friday before organisers responded with tricky pin positions for the weekend.

However, it was Oosthuizen who held on to a one-stroke lead heading into Sunday's final round, looking to record a wire-to-wire victory and win his second Open title.

Morikawa admitted he had little experience of links golf - and recorded his worst result as a professional when finishing joint 71st at last week's Scottish Open - so the benign conditions perhaps suited the Californian, who is regarded as of one of the game's finest iron players.

Amid the searing heat on Sunday, the world number four also showed he has the temperament to add further to his major tally.

As three successive birdies dropped for Morikawa he suddenly found himself taking a four-stroke lead as he hit the turn, with Oosthuizen stuttering in the final pairing alongside him.

But the first flicker of emotion from the American came at the 10th when he made a superb up-and-down from the back of the green to save par, fist-pumping in celebration.

By this point the Spieth charge was alive but Morikawa birdied 14 to keep his compatriot at arm's length and, with roars going off further up the course, saved par again at 15.

From there it was a case of keeping his nerve as the anticipation grew among the excited fans, but that was no trouble for Morikawa who took a two-shot lead down the last and strode on the 18th green to huge applause, moments away from becoming the first man to win on his Open debut in 18 years.

He two-putted for a final par to see out the victory and then waved and clapped the fans packing out the 18th grandstand in fittingly composed fashion.

"I tell everyone I am not the biggest history guy but I want to add myself to history and make memories for myself," said Morikawa, admitting he will "have a few drinks" from the Claret Jug.

"Everything about this week was very special, to cap it on my caddie's birthday, even more special.

"I've had belief in myself since turning pro that I can do it. When it's coming to these tournaments, courses and styles that I have never played, I do my homework Monday to Wednesday to know what I need to do."

Louis Oosthuizen's disappointment was in contrast with Dylan Frittelli's delight as those were the only two South African flags left flying in the top five by the end of the 149th Open at Royal St George's on Sunday.

After three days of incredible golf, Oosthuizen was outplayed by Collin Morikawa and undone by his own cold putter as he watched the American march to victory.

Oosthuizen held the lead from day one and was one clear of the field going into the final round. But a closing 71 ended his hopes of a second Major as he finished tied third and four strokes behind Morikawa's winning total of 15 under par.

Morikawa's three successive birdies to close out the front nine took him into the lead, and a single birdie on the back nine was all he needed to claim the second Major of his career with a final round of 66 to become the first golfer in history to win two different Majors on debut after winning the PGA Championship in 2020.He finished two strokes clear of second-placed Jordan Spieth.

While Oosthuizen's wait for a second Major continues, fellow South African Frittelli was delighted with his week at Royal St George's.

Frittelli made the most of his late inclusion with a fifth-place finish on nine under par after closing with a 68. A performance he was justifiably very proud of.

"I got in on Monday morning and couldn't have asked for much more. Just to be in contention on the weekend was my goal. I think I more than did that. I had a struggle on 11 today but besides that it was pretty plain sailing and I'm really proud of the way I handled everything. It gets me back in The Open the following year, so St Andrews is going to be awesome. I love that place and any Open Championship by me is tons of fun."

Justin Harding finished tied 19th on four under, followed by JC Ritchie, Daniel van Tonder and Dean Burmester all in tied 40th on one under par. Christiaan Bezuidenhout finished tied 53rd on one over.