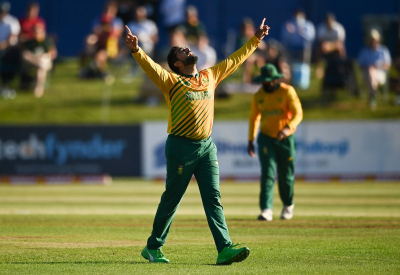 Tabraiz Shamsi, put in a superb performance to limit Ireland to 132 for nine in their 20 overs, handing the visitors a comfortable 33-run win in the first T20I at The Village in Dublin on Monday.

After Ireland had won the toss and sent the Proteas in to bat, the hosts kept the visitors to a par score of 165 for seven. However, Ireland’s chase never got off the ground as regular wickets fell throughout their innings, with Shamsi tearing through their lineup on his way to figures of 4-27 off four overs.

Proteas top scorer Aiden Markram made 39 and there were two partnerships in the 30s, but they were reduced to 115 for 5 at one stage and appeared in danger of missing out on a score around 160. Offspinner Simi Singh and left-armer Josh Little were particularly successful in keeping South Africa relatively quiet, but the rest of the attack conceded at least nine runs an over each. However, a strong finish by South Africa's lower order took them to a competitive total. And even if the visitors were not entirely happy with their score, they had reason to be because Ireland did not look like an outfit that could come close in the chase, despite South Africa's inability to eventually bowl them out.

The hosts were 38 for 4 after the powerplay, before Tabraiz Shamsi, the top-ranked bowler in the format, had even been introduced. Shamsi took four wickets for the second time in his career - also the second time in 2021 - to become the year's leading wicket-taker in the format so far. He tossed the ball up to bowl Singh, broke through Shane Getkate's defences with a wrong 'un, had Mark Adair caught on the long-off boundary and had Harry Tector stumped, as he came down the track to a googly.

George Linde provided good support at the start and in the middle of the innings, but South Africa drifted towards the end with Ireland's last pair putting on 44, their highest of the innings.
Openers out? No problem, we have some more

Ireland would have been relieved to see the back of Quinton de Kock after he had faced only nine balls. He did some damage when he hit Barry McCarthy over long-on for the first six of the South African innings and Mark Adair for back-to-back boundaries, before mistiming a drive to mid-off to depart in the third over. But South Africa had another opener in reserve. de Kock's ODI partner Janneman Malan was in at No.3 and did not get going at all before he hit Adair to Singh at mid-on.

Enter a fourth opening batter in Markram, who outlasted Temba Bavuma after the captain under-edged a reverse-sweep, and also starred in the two highest partnerships of the innings. Markam and Rassie van der Dussen put on 35 for the fourth wicket before Markram and David Miller shared 36 for the fifth, and South Africa had a solid foundation to build on. They seem to have identified Markram as someone who can move around the order, and though it leaves no room for Kyle Verreynne or Heinrich Klaasen, it allows them to play all their openers in the same XI.

South Africa's coach Mark Boucher has repeatedly said he believes Kagiso Rabada is selling himself short when it comes to his batting, and Rabada seems to have taken the thought seriously. He showed his potential and his finishing skills by giving South Africa the most profitable over of the innings, which also happened to be the last one. Rabada had faced just three balls and scored two singles before Adair delivered the final six balls, but had seen enough to know what he needed to do.

He dispatched a low full-toss through the covers for four, then cleared the front leg to send a full ball through midwicket, after which he drove Adair down the ground and finally pulled a slow ball to deep square leg for a quartet of fours. Doubtless Rabada had a full house of boundaries on his mind, but he was beaten by lack of pace as he tried to heave the fifth one away and finished with a single. He scored 17 off the last over, and was unbeaten on 19 off nine balls to stake a claim for a spot higher in the order.

South Africa's fielding standards have not been at their highest on this trip. They dropped four catches in the second ODI to lose to Ireland for the first time, and two again in the powerplay today, though they were of little consequence. First de Kock made significant ground to try and pouch the top edge off Tector's attempted scoop off the penultimate ball of Lizaad Williams' first over, but the chance popped out of his hands as his elbows hit the floor.

The batters had crossed and Williams had a chance to dismiss Andy Balbirnie with his next ball when the Irish captain smacked the ball to Malan at backward point. Malan dived full stretch to his right but could not hold on. Balbirnie didn't last much longer, though. After Lungi Ngidi removed George Dockrell with the first ball of his first over, he had Balbirnie caught behind with the first ball of his second. Thus, Williams was the only bowler to go wicketless.
Ireland: Andrew Balbirnie (capt), Paul Stirling, Kevin O Brien, Harry Tector, George Dockrell, Lorcan Tucker (wk), Shane Getkate, Simi Singh, Mark Adair, Barry McCarthy, Joshua Little

With Inputs from ESPN.