Pretorius,Dala back for Proteas while star trio rested for Sri Lanka series. 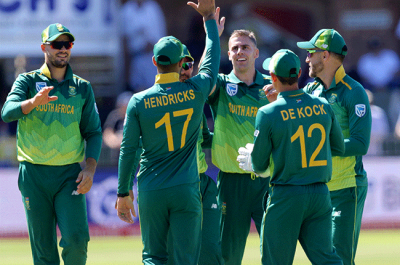 All-rounder Dwaine Pretorius is back in the Proteas squad for the One-Day International and T20 tour of Sri Lanka next month.

The Proteas will play three ODIs and three T20s in Colombo, starting 2 September.

Pretorius missed both the tours of the West Indies and Ireland because of medical reasons.

Also, Junior Dala has been included in the ODI squad while Lungi Ngidi will miss the ODI series due to personal reasons. He will join the team in time for the T20 series.

Quinton de Kock has been rested from the ODI team.

David Miller meanwhile sustained a hamstring injury during the final T20 against Ireland and will miss the ODI series while his progress is being monitored. Both have been marked to make their return to play in the T20 series

The ODI squad will travel to Sri Lanka first, followed by the T20 players.

More in this category: « Swallows ready to face Pirates in the MTN 8 clash. ECB chief 'very confident' Ashes series will go ahead after assurances from Cricket Australia. »
back to top