The 59th Bundesliga season kicks off this weekend. 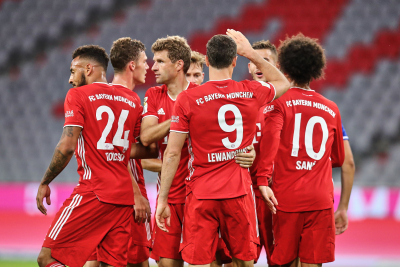 The 59th Bundesliga season kicks off on Friday as nine-time defending champions FC Bayern München open the campaign away at Borussia Mönchengladbach. A storied fixture set to be played for the 107th time in the league, it signals a new era as Julian Nagelsmann takes charge of the record champions for the first time in a competitive fixture.

It’s also our first look at goalscorer extraordinaire Robert Lewandowski since he achieved the seemingly impossible and broke Gerd Müller’s single-season goals record with the last kick of 2020/21. The Poland captain got a hat-trick Bayern met Gladbach - in a 6-0 victory in May - as part his tally of 41 league goals for the season.

Gladbach, though, boast a formidable recent record against Bayern. They have won their last two home matches against them and have taken more points off them than any other team has managed in the last 10 years.

Lewandowski, meanwhile, is unlikely to be alone in the upper echelons of the scoring chart this season. His closest challenger last year was Andre Silva, who has now joined Bayern’s nearest rivals. RB Leipzig boasted the league’s meanest defence last term and will now hope to have the attack to match as they seek to go one better under their American head coach Jesse Marsch and dethrone the champions.

Leipzig begin their campaign on Sunday away at 1. FSV Mainz 05. The 05ers were the unlikeliest survivors from last season after a sensational Rückrunde under Bo Svensson, who currently has an even better record than illustrious predecessors Jürgen Klopp and Thomas Tuchel.

Another challenge for Bayern is expected to come from Borussia Dortmund, where Erling Haaland is going into his second full season and already has a DFB Cup hat-trick to his name this term. American Gio Reyna is their new No.7 and Marco Rose the new head coach, but they face a Matchday 1 test from Eintracht Frankfurt on Saturday evening. The Eagles narrowly missed out on UEFA Champions League qualification last time out and have brought in Colombian striker Rafael Borre to take Oliver Glasner’s new team to the next level.

There’s another early clash of European contenders when 1. FC Union Berlin host Bayer 04 Leverkusen and their new coach Gerardo Seoane. And completing the line-up of new coaches among the top teams, two-time Bundesliga champion Mark van Bommel has taken up the reins at Champions League qualifiers VfL Wolfsburg. The Wolves are the first opponents for VfL Bochum 1848 after they ended their 11-year top-flight absence by winning Bundesliga 2 last season.

The other promoted side, SpVgg Greuther Fürth, are back for only their second Bundesliga season. They kick off away at one of last term’s surprise packages, VfB Stuttgart, who have another exciting American head coach in Pellegrino Matarazzo.

The opening Saturday of 2021/22 is then completed by TSG 1899 Hoffenheim’s visit to FC Augsburg and DSC Arminia Bielefeld hosting Sport-Club Freiburg.

The Bundesliga’s first matchday will finish on Sunday when 1. FC Köln face Hertha Berlin. The Billy Goats only survived via the play-off last season and now have a coach known for his attacking approach in Steffen Baumgart. Meanwhile, the capital club have been rebuilding after their own disappointing campaign, bringing in a host of big-name reinforcements like Kevin-Prince Boateng, Stevan Jovetic and Suat Serdar.

But before the Bundesliga even gets going, it’s derby day in Germany’s second city. Matchday 3 in Bundesliga 2 kicks off a few hours before Gladbach and Bayern as FC St. Pauli host cross-city rivals Hamburger SV in a Friday night clash between two neighbours who couldn’t be more different.

Sunday then finishes with a Bundesliga-worthy encounter between relegated giants SV Werder Bremen and SC Paderborn 07.

More in this category: « Vodacom supports Sunshine Tour caddies with donation. Varane unavailable for Man Utd opener against Leeds. »
back to top