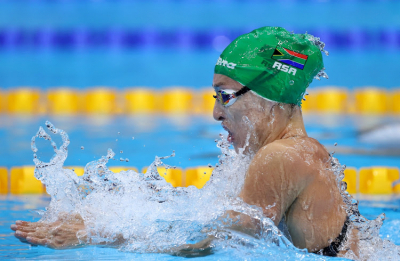 "We need to explain the miscommunication that occurred," said Hendricks. "The story going was that Sascoc does not support the athletes. The message that was supposed to come across was, Sascoc doesn't provide the funds.

"Sascoc has always gone out to its partners to seek those funds. Yes, the athletes will be receiving incentives for their performances.

Speaking at a post-Tokyo media debriefing on Friday, Hendricks said the organisation would seek to have a more proactive approach to bonuses and mooted a fund pool for Games and Paralympics.

"We welcome the athlete sponsorships and incentives that have been offered, but we need to consider that this must also apply to Paralympic athletes, who generally earn more medals," Hendricks said.

Following the public outcry this week around an apparent shortage of funds for Olympic medal bonuses, Sascoc admitted it would need to plan better ahead of the 2024 Paris Games to avoid confusion and controversy.

Multiple crowdfunding efforts were launched after media reports suggested swimmer Schoenmaker (gold and silver) and surfer Buitendag (silver) would not be rewarded for securing medals at the Tokyo showpiece.

Sascoc, however, insisted its partners had confirmed the nation’s podium finishers would receive incentives, along with their coaches, in line with previous bonuses paid to Olympic and Paralympic medallists.

"Moving forward, we need to set up our own committee and a budget for incentives, and become more independent."

"We want to thank the minister for committing to providing incentives, not only for the Olympics but the Paralympic athletes and their coaches as well."