England fight back at Lord's as Anderson, Root and Rory Burns impress on second day. 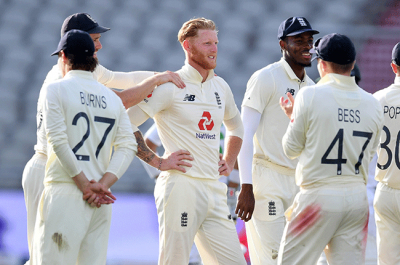 England's spirited fightback in the second Test against India was checked by the loss of Rory Burns late on the second day.

Burns was lbw to Mohammed Shami for 49, 20 minutes before the close in the gathering gloom at Lord's.

Burns and Root had added 84 for the third wicket, steadying England after they had lost two wickets in two balls, including Haseeb Hameed for a golden duck.

Playing his first Test for five years, Hameed was bowled first ball by Mohammed Siraj and departed to stunned silence.

India lost their last seven wickets for 88 runs on Friday to be bowled out for 364.

England endured a disappointing opening day, a below-par bowling performance and a superb unbeaten century from KL Rahul helping India to 276-3 after they were asked to bat in testing conditions.

However, there was an almost instant signal that Root's side would fare better on day two when Rahul spooned Ollie Robinson's second ball of the day to cover.

The improvement was engineered by the two class acts in the England team - Root the premier batsman and Anderson the ageless maestro of a fast bowler.

It perhaps could have been ever better. Two catches and three run-out opportunities were missed as they tried to make their way through the India lower order. Realistically, though, none were too expensive in terms of runs.

Given the way they were outplayed in the drawn first Test, in addition to the sense of foreboding after Siraj's double strike, England's position at the close is more satisfactory than 24 hours earlier.

They remain a long way behind but, on a slow, true pitch, there can be cautious optimism that they can battle towards parity.