Pulisic fires Chelsea to victory while Vardy pounces to give Leicester win. 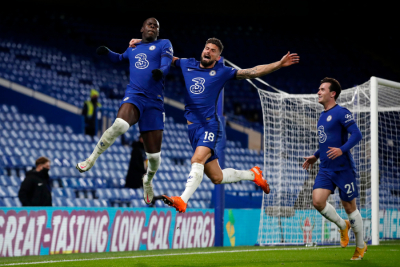 Christian Pulisic fired Chelsea to a 3-0 win at Stamford Bridge on Saturday against Crystal Palace.

Marcos Alonso opened the scoring for Thomas Tuchel's side and it was a memorable Premier League debut for Trevor Chalobah who scored in front of the home crowd.

Alonso put Chelsea ahead on 27 minutes with a free kick. He swept the ball over the Crystal Palace defence with his left foot.

Pulisic added Chelsea's second 10 minutes later when Vicente  Guaita saved a Mason Mount shot. The goalkeeper only managed to push the ball as far as Pulisic, though, who tapped it into the net.

Chelsea's third came from Chalobah -- who used to be a ballboy at Stamford Bridge -- on 58 minutes. He struck the ball into the bottom corner from 25 yards out.

The result means Patrick Vieira starts his tenure at Crystal Palace with a loss.

Meanwhile Leicester City got their Premier League campaign underway with a 1-0 home win over Wolverhampton Wanderers thanks to a trademark Jamie Vardy goal in the 41st minute at the King Power stadium on Saturday.

Adama Traore spurned a gilt-edged chance for Wolves before the 34-year old Vardy popped up at the near post to delight the home fans, making up for an earlier strike that was disallowed for offside.

Ricardo Pereira weaved his way past two markers on the right flank and delivered a low cross to the edge of the six-yard box for Vardy to beat Conor Coady to the ball and turn it into the top corner with a deft touch.

Leicester nearly grabbed a second on the stroke of halftime when midfielder Youri Tielemans had Wolves goalkeeper Jose Sa at full stretch with a swerving long-range effort.

Caglar Soyuncu denied the visitors an equaliser when he slid in to block a Francisco Trincao effort shortly after halftime before Vardy shot wide with Leicester looking dangerous on the break.

Coady had the ball in the back of the net for the visitors in the 89th minute as they pressed hard for an equaliser, but the goal was scrapped for offside, handing new Wolves manager Bruno Lage a losing start in the Premier League.

There was polite applause from the Goodison Park crowd as Benitez emerged from the tunnel before the game and despite starting well, a calamitous error from Michael Keane allowed Adam Armstrong through for his first Premier League goal on his Southampton debut in the 22nd minute.

Everton managed to ride the wave of Saints confidence until half-time, but Benitez's first team talk clearly worked as Richarlison, fresh from his Olympic gold with Brazil at Tokyo 2020, hauled Everton level two minutes after the break.

It was then a quick Everton double that completed a superb comeback as Abdoulaye Doucoure fired home in the 76th minute before a classic striker's goal from Dominic Calvert-Lewin made sure of the three points.

It is now 10 years since Everton lost their opening game of the Premier League season. There were plenty of bright moments from their Saints, but their dismal 2021 form has carried over into the new season, having won just four Premier League games since the turn of the year.