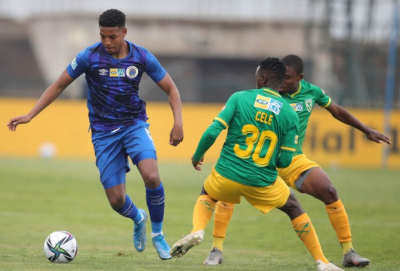 Golden Arrows have become the first team to book their spot in the MTN8 semifinals after they defeated SuperSport United 4-3 on penalties (2-2 after extra time) at Princess Magogo Stadium.

Arrows looked in trouble trailing 2-1 near the end of extra time, but they were able to pull a rabbit out of the hat in the first competitive match of the 2021-22 South African top-flight season and overcome a tough-to-beat United.

Abafana Bes’thende enjoyed most of the possession through the first half, with the likes of Velemseni Ndwandwe and Nduduzo Sibiya seeing plenty of the ball in midfield. However, the hosts struggled to find a slick rhythm and create genuine attacking opportunities.

Goalless at the break, United almost claimed an opener in the first minute of the second half, with Brandley Grobler bursting through the defence and forcing a sharp save from goalkeeper Sifiso Mlungwana at his near post with an effort from a tight angle.

Arrows soon took the lead, with Knox Mutizwa scoring from a penalty in the 50th minute. The spot-kick was awarded after Teboho Mokoena pulled back Sibiya inside the 18-yard area. That there were no protests from SuperSport defenders indicated that referee Abongile Tom was spot on with his decision.

United looked to shuffle their pack with a double change that introduced both Iqraam Rayners and Ghampani Lungu. The latter duly struck an equaliser on 78 minutes, beating Mlungwana at his near post with a low shot from the right of the penalty area, after fine set-up play from Mokoena and Thamsanqa Gabuza.

Mokoena nearly gave Matsatsantsa the lead in the 85th minute, with his shot direct from a free-kick taking a slight deflection off the top of the defensive wall and hitting the crossbar. It was the closest either side came to deciding the game inside the regulation 90 minutes.

Extra time went just nine minutes before another goal arrived, with the visitors going ahead for the first time. Rayners latched onto a fine long pass from Mbule, cut inside Trevor Mathiane and whipped a great shot into the top corner of the net to make it 2-1 to United.

Arrows pushed hard for an equaliser in what remained of extra time – and were perhaps unlucky to be denied a second penalty when Luke Fleurs committed a similar offence to the first spot-kick incident – but they were ultimately rewarded in the 118th minute when substitute Michael Gumede somewhat unwittingly made it 2-2 and sent the game to penalties.

Two misses from United in the shoot-out allowed Arrows to clinch victory as Gumede bundled home the winning spot-kick to see the host in the last four.

It was also Arrows’ second time in six attempts in this competition that they had managed to go beyond the last-8, the last time being when they won it with Manqoba Mngqithi in 2009.

More in this category: « Pulisic fires Chelsea to victory while Vardy pounces to give Leicester win. Springboks cruise to comfortable win over sloppy Argentina in Rugby Championship. »
back to top