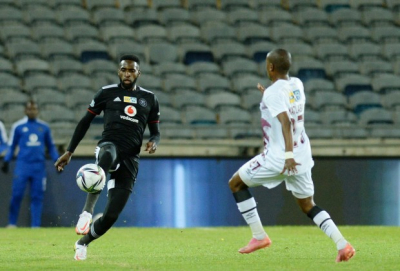 Swallows FC knocked-out title holders Orlando Pirates out of the MTN8, claiming a 2-1 win over their Soweto rivals at Orlando Stadium.

The Birds secured the victory thanks to an early brace from Ruzaigh Gamildien, while the Buccaneers pulled one back through Kabelo Dlamini but were unable to capitalise on their dominance in the second half.

Swallows started the stronger of the two teams,and were duly rewarded in the 16th minute when Gamildien opened the scoring with a fine strike direct from a free-kick – Pirates goalkeeper Richard Ofori got a hand on the shot but was unable to keep it out.

Seven minutes later, Swallows doubled their advantage: Ofori came way off his line and successfully beat Dillon Solomons to a ball, before the Birds debutant robbed the keeper of possession and allowed Gamildien to score with a long-range effort into an unguarded net.

Pirates soon gave themselves a lifeline, with Deon Hotto earning a penalty in a challenge with countryman and Swallows goalkeeper Virgil Vries. Dlamini expertly converted the spot-kick to pull a goal back on the half-hour mark.

The first half ended 2-1 in favour of the visitors, while the second opened with both teams making a double change. Pirates swapped out their fullbacks to bring on Bandile Shandu and veteran Happy Jele, while Swallows attackers Solomons and Khetukuthula Ndlovu made way for Monnapule Saleng and Keletso Makgalwa.

In the 62nd minute, Hotto showed great tenacity and directness down the left for Pirates and fired a cross low cross into the box. Vincent Pule diverted the ball towards goal with a backheel but it lacked power and was straight at Vries.

Pirates went close again five minutes later. Bandile Shandu played a nice ball over the top for Hotto's run and the Namibian controlled with his chest but put his shot wide under pressure from Wandisile Letlabika.

Buccaneers, redoubled their efforts in the final stretch but it was a case of too little, too late. Fortune Makaringe, Kabelo Dlamini and Terrence Dzvukamanja all had chances to send the game to extra-time but failed to find the mark.

The teams will be back in action next weekend with their opening DStv Premiership matches. Pirates will host Stellenbosch FC on Saturday 21 August, while Swallows will welcome Bloemfontein Celtic (or more likely the purchasers of their top-flight status) the following day.

More in this category: « Joe Root hits imperious 180 not out as England earn 27-run lead over India. Liverpool ease to victory over Norwich City,thanks to Jota, Salah and Firmino. »
back to top