Liverpool ease to victory over Norwich City,thanks to Jota, Salah and Firmino. 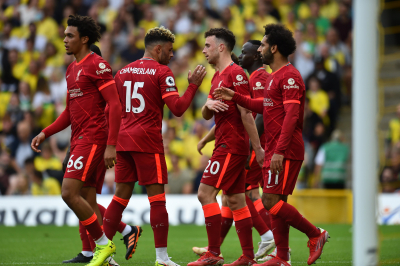 Liverpool kicked off their 2021-22 Premier League campaign with a straightforward win over Norwich City at Carrow Road on Saturday.

Doigo Jota fired Liverpool in front in the 26th minute, firing a low drive past Norwich keeper Tim Krul to stake Jurgen Klopp's side to a half-time lead

Liverpool doubled their lead in the second half when Roberto Firmino redirected a Mohammed Salah assist past Krul in the 65th minute to make it 2-0.

Salah put the Reds up by three soon after, settling a poor clearance from Norwich after a corner and curling a lovely shot into the back of the net to seal the three points for Liverpool.

With defensive linchpin Virgil van Dijk back after nine months out with a serious knee injury, Liverpool enjoyed a relatively trouble-free evening.