Real Madrid open LaLiga season with a win over Alaves. 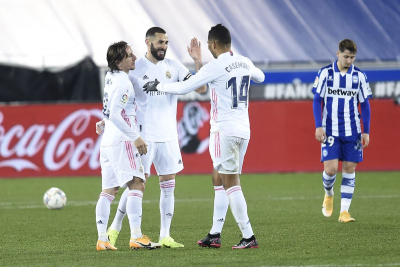 Karim Benzema picked up where he left off last season by scoring twice to fire Real Madrid to a 4-1 win away to Alaves in their opening game of the LaLiga campaign.

Real had an uninspiring first half in Ancelotti's first league game since taking charge of the club for a second time but Benzema settled their nerves by blasting the ball into the net in the 48th minute after being teed up by Eden Hazard.

"To call Benzema just a striker does not do him justice. He is a very complete player, far more complete than five years ago," the Italian coach said.

"He is the one who finishes our moves off but he also reads the game so well."

The Italian also criticised his side for their sluggish start but was pleased with how they improved after half-time.

"The first half we were a little slow when we had the ball and when we didn't have it, we needed to press with more intensity, the game was slow and that's not what we wanted," he added.

"But we were much better in the second half, we showed more intensity and had more quality."

Defender Nacho Fernandez added to Real's lead eight minutes later, sliding in to stab a Luka Modric through ball into the net from close range.

Benzema scored a scrappy second goal in the 62nd but moments later Alaves pulled one back when striker Joselu slotted in a penalty after a foul by goalkeeper Thibaut Courtois.

Substitute Vinicius Jr added a final goal for the visitors in stoppage time, netting with a diving header as he met a cross from debutant David Alaba.

French striker Benzema was Real's standout player last season with 23 league strikes, more than a third of the team's goal haul, and his form earned him a recall to the France squad for the first time in six years.

More in this category: « Liverpool ease to victory over Norwich City,thanks to Jota, Salah and Firmino. Messi presented to crowd before PSG beat 10-man Strasbourg. »
back to top