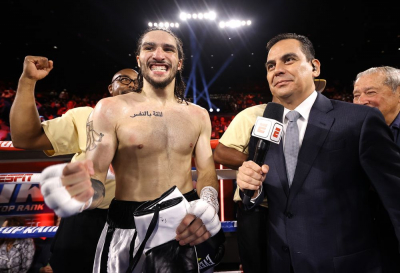 Nico Ali Walsh paid tribute to his grandfather Muhammad Ali as he won his debut professional bout wearing a pair of shorts he had given him.

The 21-year-old made easy work of the fight, knocking down Jordan Weeks after 70 seconds.

The middleweight fight in Catoosa, Oklahoma, on Saturday night was eventually stopped before the end of the first round.

"This lived up completely to my expectations.

"Obviously, my grandfather, I've been thinking about him so much. I miss him."

Muhammad Ali won boxing's world heavyweight title on three occasions, known as 'The Greatest' died in 2016 and had been battling Parkinson's syndrome for over three decades.

Ali Walsh, who is studying for a business degree, is the son of Ali's daughter Rasheda Ali.

After the win Ali Walsh celebrated in the ring with Bob Arum, who also promoted 27 of his grandfather's fights. Ali Walsh is signed to Arum's Top Rank company.

More in this category: « Messi presented to crowd before PSG beat 10-man Strasbourg. Baxter hints at the new-look Chiefs while Amazulu have psychological edge over City. »
back to top