Baxter hints at the new-look Chiefs while Amazulu have psychological edge over City. 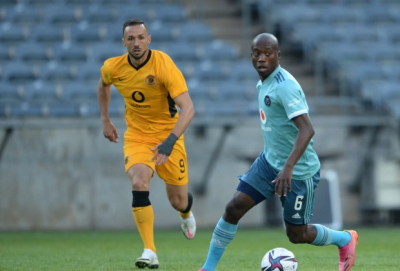 Mamelodi Sundowns are set to go head to head with Kaizer Chiefs in the pick of this weekend's MTN8 quarterfinal matches on Sunday.

The memory of the 2-1 defeat to Chiefs will still be fresh in the minds of Sundowns players as the loss ended their record-breaking 22-match unbeaten run in the DStv Premiership in April this year.

However, Sundowns went on to clinch their fourth successive league title, while Chiefs sneaked into the top eight after defeating TS Galaxy in their last match of the domestic season and they qualified for this season's MTN8.

"It’s always a tricky encounter especially in the final stages of the pre-season training where you’re not too sure how far and how long the players can go," said Mngqithi.

"We believe the team has prepared very well and they’ve been looking good in all the friendlies we’ve played. We have devised some more build-up schemes, worked a bit harder on our counter pressing and our high press. We believe that the team we are up against will come at us.

"The good thing about a match like this is that when two good teams that are playing, you don’t expect anyone to be sitting back, which will make for a very interesting encounter. If that is the case, I believe we will have a spectacle of a match because both teams have reinforced and they are looking forward to seeing some of their new players," he said.

"In the seven years I’ve been at Sundowns, we’ve struggled with this cup and so we are going all out to finally become the winners of this cup, but it starts with a first step against Kaizer Chiefs. It’s a very difficult encounter, considering the number of new players that they’ve brought in; it’s very difficult to profile you they will be using in this one because in the Carling Black Label Cup they did not use some of those new signings," the Sundowns coach added.

Meanwhile Chiefs coach Stuart Baxter is not sure how many of the club’s new signings will start Sunday’s MTN8 tie against Mamelodi Sundowns but predicts a few of the new faces will get their club debuts.

"It’s difficult to say right now. Everybody has a bit of a different starting point, in terms of when they come in, how much experience they have had with me before, "he told a news conference.

"A player like Cole Alexander has had me as a coach before, some of the lads had me in the national team and some of the lads were here in my first stint, so everybody has a little bit of different starting point.

"Training will tell us in our preparations who is putting their hands up and who needs a little more time, due to maybe fitness or otherwise.

"In terms of injuries, Lebo Manyama did his first training with the team. It doesn’t mean he is fit but fit enough to train. We’ve got the ones that are injured long-term, Leo Castro, Dumisani Zuma," Baxter said.

Elsewhere AmaZulu FC will battle it out with Cape Town City in the MTN8 quarterfinal match at the Moses Mabhida Stadium in Durban on Sunday.

Usuthu will have a psychological edge over the City with coach Benni McCarthy having masterminded a 5-1 win over the Citizens in their last match, which was a DStv Premiership clash four months ago.

The Durban-based side finished as runners-up in the recent KwaZulu-Natal Premier's Cup with the club's marquee signing Keagan Buchanan, who is a former Kaizer Chiefs star, featuring for the team.

Cape Town City coach Eric Tinkler is back in charge at City and insists fixing up the club’s faults from last season, when they finished seventh, has been his top priority.

"First and foremost we’ve been looking at ourselves and assessing where our strengths and weaknesses lie," he said.

City scored 42 goals in the league, bettered only by champions Mamelodi Sundowns (49) but they also leaked 40 goals, which was the second highest behind bottom-placed Black Leopards.