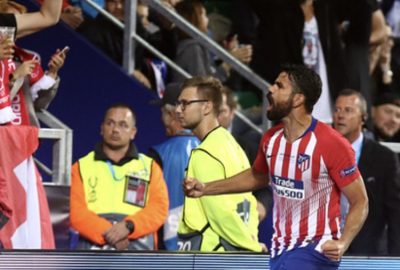 The Spain forward, 32, left Atletico Madrid in December after asking the club to terminate his contract early.

It was his second spell at the La Liga side, but he fell out of favour after rejoining from Chelsea in 2017.

Costa's new club Atletico Mineiro are five points clear at the top of Brazil's Serie A.

Costa was born and raised in Brazil and played two friendlies for the country in March 2013, but having been granted Spanish nationality, declared he wanted to play international football for Spain later that year.

He won two Premier League titles during his three-season stint with Chelsea, scoring 59 goals in 120 games.

But his spell ended in acrimony after then manager Antonio Conte told him via text message that he was not part of his plans for the following season.

Costa refused to return to Chelsea from his home in Brazil after being told to train with the reserves, and was later sold back to Atletico Madrid.

However, injuries limited him to 43 league starts in three years, during which time he scored just 12 goals, and he asked to leave the club "for personal reasons".

The Brazilians won 1-0 in Buenos Aires and will host the Argentines on Wednesday in the second leg.

More in this category: « Baxter hints at the new-look Chiefs while Amazulu have psychological edge over City. Bayern Munich's German legend Gerd Muller dies aged 75. »
back to top