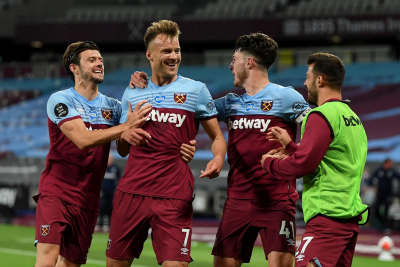 West Ham United twice came from behind to get their Premier League campaign off to the ideal start by beating Newcastle in a hugely entertaining match at St James' Park.

The Hammers trailed 2-1 at half time but staged a remarkable fightback in the second half with goals from Said Benrahma, Tomas Soucek and Michail Antonio.

West Ham equalised midway through the half after a VAR review ruled Aaron Cresswell's cross-shot had gone all the way into the net untouched, despite the flag initially going up against Jarrod Bowen for offside.

Newcastle restored their lead just before the break when Jacob Murphy nodded in Matt Ritchie's cross but West Ham levelled again soon after the restart as Benrahma headed in.

After Pablo Fornals was adjudged to have been fouled by Murphy inside the box, Antonio saw his penalty kept out by debutant keeper Freddie Woodman but Soucek reacted quickest to the rebound to put the Hammers ahead for the first time.

Antonio then wrapped up the win, driving in a thunderous shot for his 47th Premier League goal for the Hammers, equalling Paolo di Canio's record in the competition for the club.

Meanwhile Tottenham Hotspur striker Harry Kane is not in the squad for his side's opening game of the Premier League season against Manchester City.

Kane has been heavily linked with a move to City, whose manager Pep Guardiola has previously declared his interest in signing the 28-year-old England captain.

Kane, who on Friday trained with the Spurs squad for the first time since returning from holiday, has made it known he wants to leave the club he joined as a schoolboy.

He returned late from his holiday and had a five-day quarantine period.

The striker was part of Gareth Southgate's England squad who reached the final of Euro 2020 last month.

"He needs to work [on his fitness after returning late from his holiday]. He needs to keep on working until he's ready to help the team," Spurs boss Nuno Espirito Santo told Sky Sports.

"He doesn't need too many sessions. He needs to be fit."

Asked whether he would be at the game, Nuno added: "He worked in the morning. I don't know what he's going to do [now]."