Sharks sink Cheetahs at Kings Park while Pumas fight back to share spoils. 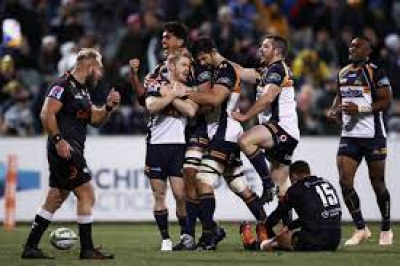 The Cell C Sharks held on for a 38-31 victory in an error-strewn Carling Currie Cup clash against a battling Toyota Cheetahs at Jonsson Kings Park in Durban on Sunday afternoon.

The win sees the Sharks hold onto second place on the Currie Cup log, while cutting the gap on the first-placed Bulls to just four points.

The Cheetahs remain rooted to the bottom of the table following their fifth loss of the campaign.

Despite making several changes to their starting lineup from their high-scoring draw with the Lions, the Cheetahs started the brighter of the two teams as centre Evardi Boshoff opened the scoring with a try in the sixth minute.

The Sharks hit back through Thaakir Abrahams’ first try and then took the lead when hooker Kerron van Vuuren and No 8 Henco Venter scored in quick succession. The Cheetahs managed to keep themselves in the contest as Craig Barry’s try saw the visitors go into the break trailing by just the single point.

However, the Cheetahs suffered a blow when flank Jacques Potgieter was rightfully shown a red card for a dangerous tackle on Sharks flank Dylan Richardson,as his shoulder made contact with Richardson’s head.

The Sharks wasted no time in utilising their numerical advantage as Cameron Wright sniped over, with Abrahams and Van Vuuren then each scoring their second tries of the match to put the hosts in control.

To their credit, the Cheetahs kept fighting and got just reward when Cameron Dawson scored. They were given even more hope of snatching a losing bonus-point when the Sharks lost both Emile van Heerden and Venter to yellow cards in the final five minutes of the game, reversing the numerical advantage.

On his return to action from the bench, Robert Ebersohn scored in the final minute of play, allowing the Cheetahs to come away with a single point from the match.

Meanwhile two late tries from the New Nation Pumas enabled the Mbombela side to share the spoils 40-40 (halftime 19-26) against DHL Western Province in the Carling Currie Cup at DHL Newlands in Cape Town on Sunday.

More in this category: « Relentless West Ham power past Newcastle while Kane not in the starting line-up for Man City clash Sundowns sneak into semi-finals with a penalty shoot-out victory over Chiefs. »
back to top