Sundowns sneak into semi-finals with a penalty shoot-out victory over Chiefs. 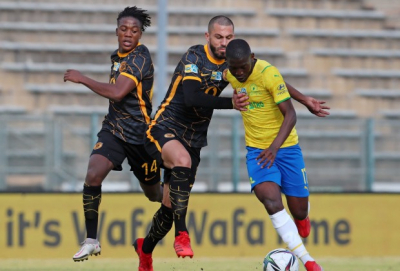 The victory booked Sundowns spot in the semifinals of the competition alongside Lamontville Golden Arrows and Swallows FC, while the Chiefs bowed out of the tournament.

In a game that proved to be a tight contest, ending 2-2 after regulation time and extra-time, Bafana Bafana commander in chief Hugo Broos, who was in the stands, will take a lot of positives heading into the FIFA World Cup qualifiers next month against Zimbabwe and Ghana.

The two Gauteng giants battled it out in the MTN8 with a place in the semi-finals of South Africa’s richest Cup competition at stake.

Chiefs lacked cohesiveness in defence, where Hlanti was pushed down the left, Njabulo Blom on the right and with Eric Mathoho and Daniel Cardoso partnering centrally, and as result they were punished.

Lyle Lakay found himself with acres of space on the right wing and floated in a delightful cross which found Peter Shalulile, who was between Cardoso and Hlanti. The Namibian kept his composure and hit a hard and low header past Itumeleng Khune.

Mothobi Mvala and Rivaldo Coetzee bullying newbies Alexander and Nange in the engine room. And the duo's efforts paid off, with Mvala setting up the evergreen Themba Zwane.

Zwane picked up his spot and hit a hard and low shot that came off the underside of the goal post and rolled behind a flat-footed Khune.

But Chiefs pulled a goal back in the 38th minute when Njabulo Blom delivered the ball from the right onto the head of Bernard Parker and he finished down and into the bottom left corner.

Amakhosi equalised on the hour mark when Keagan Dolly, who had just come on as a substitute for his debut, played the ball between the lines for Khama Billiat to run onto and fire on the slide first-time into goalkeeper Kennedy Mweene's right-hand corner.

The sides still could not be separated after extra-time and so the tie went to penalties. Brazilians keeper Mweene made four brilliant saves in the shootout and netted one himself to put the DStv Premiership champions into the last four at the expense of their counterparts.

More in this category: « Sharks sink Cheetahs at Kings Park while Pumas fight back to share spoils. Tottenham beat Man City without Harry Kane as Son Heung-Min nets only goal. »
back to top