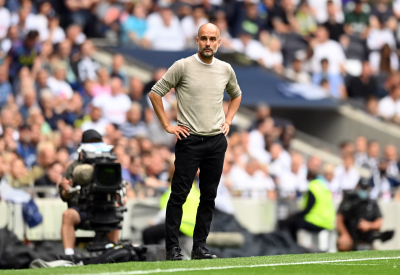 Harry Kane - heavily linked with a move to City - sat out this pulsating encounter but Pep Guardiola wasted no time in throwing in his British record signing,Jack Grealish, from Aston Villa.

It was Son Heung-min who gave new manager Nuno Espirito Santo the perfect start to his reign with a low shot that snaked beyond Manchester City keeper Ederson 10 minutes after the break.

"Obviously we wanted to start well in the first game of the season and with the fans. It was an incredible performance and everyone worked so hard to get these three points," Son said after the game.

"Manchester City are currently the best team in the world so we fought for the three points and it means a lot to us at the start of the season."

"We are all professional. We wanted to focus on this game no matter who is involved or not," Son said when asked about Kane's situation.

"Obviously Harry is so, so important for us. But let's see. Last season we didn't start well against Everton so we started well. I just want to enjoy this afterwards."

Spurs fully deserved their win as they survived a shaky opening phase to play with real purpose, already showing signs of the Nuno trademark with fierce defensive discipline allied to pace on the break.

Grealish had a quiet debut, being shown a yellow card late on, and it was actually Spurs who had the best opportunity after Son's goal, only for Steven Bergwijn to shoot wide when clean through.

City had fleeting opportunities but rarely tested Spurs keeper Hugo Lloris as they looked rusty in contrast to the sharpness of their opponents.

The result continues their recent stronghold over City, who have now lost on all four of their visits to the Tottenham Hotspur Stadium in all competitions, the first time Pep Guardiola has lost four such away games in a row in his managerial career.

More in this category: « Sundowns sneak into semi-finals with a penalty shoot-out victory over Chiefs. England take three late wickets to leave second Test finely poised heading into final day. »
back to top