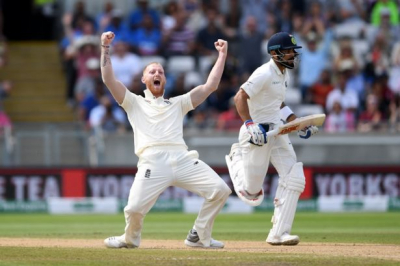 The second Test is set for a grandstand finale after England made late inroads into the India batting on the fourth day at Lord's.

England took three wickets for 20 runs to leave India 181-6, 154 ahead, with all four results possible on the final day.

A see-saw Test continued to fluctuate on a compelling Sunday at Lord's, with England reducing India to 55-3, only for the tourists to grind it out through a partnership of 100 between Cheteshwar Pujara and Ajinkya Rahane.

When Pujara fell for 45 off 206 balls - a third wicket for the tireless Mark Wood - it opened the door for Moeen Ali to remove Rahane and Ravindra Jadeja.

The gathering gloom added to the sense of theatre, with England only able to bowl the spin of Moeen and Joe Root despite the second new ball being available.

When the umpires finally decided it was too dark, with eight overs unbowled, the dangerous Rishabh Pant remained on 14 and Ishant Sharma four.

This has been a wonderful Test, one in which England - without a win in six games - have responded to being second best in the drwan series opener and allowing to reach India 276-3 on the first day.

It moved through distinct phases and contained some memorable moments: England's early potency, the resistance of Pujara and Rahane, then the drama of the late wickets.

By the end, the early finish probably suited both sides. India would have wanted to escape to the safety of the dressing room, while England did not want to leak crucial runs while being forced to bowl the spinners in fading light.

The continuing presence of Pant is England's biggest concern, but they will also know they have the opportunity to run through a long India tail when the new ball is finally taken on Monday morning.

Whatever they are chasing, England must contend with a pitch that is becoming increasingly uneven, particularly when the bowling is from the Pavilion End.

There is also a concern over Wood, who left the field with a shoulder injury after diving to stop the ball on the boundary.

Pujara had not passed 21 in his 10 previous Test innings, while Rahane possessed only one half-century in 15, yet they combined to defy England and keep India afloat.

The obdurate Pujara spent 34 balls on nought, the lively India fans - on Indian Independence Day - chanting his name when he got off the mark. He took only 12 runs from the first 100 balls he faced.

The wristy Rahane scored slightly more freely and benefitted from being dropped at point on 31 by a diving Jonny Bairstow off Moeen.

England tried everything to split the partnership and were at the point of being blunted when Wood found extra bounce to have Pujara held at a short second slip via the glove.

Rahane lazily edged Moeen behind, with the off-spinner then producing a ripping delivery to beat the grope of Jadeja and take the off stump.

Pant, who waited to bat lying down on a couch in the India dressing room, was his usual frantic self and was in animated conversation with England captain Root as the players left the field.

England were magnificent in the morning session, their bowling threatening, fielding dynamic and tactics astute.

India started their second innings 27 behind and Wood was introduced in just the sixth over. After taking KL Rahul's edge with a delivery clocked at almost 94mph, he prevailed in a thrilling duel with Rohit Sharma.

With Wood haring in, Rohit was determined to take him on, snapping into a breathtaking pull for six. When England put a third fielder on the boundary, Rohit still could not resist, allowing Moeen to take a smart catch at long leg.

Prodding at one that was well wide of off stump, Kohli was caught behind, sending Curran on an ecstatic sprint around Lord's.

India were rocked and England buoyant, only for Pujara and Rahane to mount their stoic rearguard that spanned almost 50 overs.