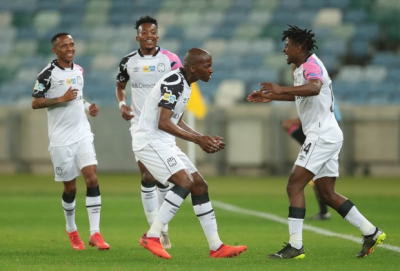 Cape Town City secured a hard-fought 2-1 victory over AmaZulu FC in a MTN8 quarterfinal match at the Moses Mabhida Stadium on Sunday evening.

The result booked City spot in the next round and sealed their place as part of the semifinal line-up where they joined Mamelodi Sundowns, Lamontville Golden Arrows and Swallows FC in the last four.

The Citizens grabbed the lead on eight minutes after Terrence Mashego ran unchallenged from the left-side of the offensive area to fire in off the far post.

The early goal was richly deserved after the visitors had started the match on the front foot after Thato Mokeke had provided AmaZulu goalkeeper Veli Mothwa with an early test.

The remainder of the first half was, though, a cagey affair with City prepared to protect their lead through slick inter-passing between new signing Khanyisa Mayo, Mduduzi Mdantsane and Surprise Ralani in the midfield that kept the ball away from the home team.

Coach Benni McCarthy was certainly a frustrated figure on the sidelines as AmaZulu looked a shadow of the team that had lit up the domestic scene last year with their scorching style of football.

McCarthy, who is certainly known for his hairdryer treatment at the half-time break, would not have minced his words at the interval and AmaZulu returned for the second period with much greater purpose.

Usuthu managed to claw themselves back on level terms nine minutes into the resumption with a finish from Lehlohonolo Majoro following a ball by Keagan Buchanan.

McCarthy was forced into a substitution following an injury to Buchanan and he introduced speedy winger Tshepang Moremi in his place, as the KwaZulu-Natal giants looked to take the lead for the first time on the night.

Moremi then made a costly mistake as he lost possession in his own half in the 89th minute and Mduduzi Mdantsane pounced to hit the back of the net with a curling effort following a mesmerizing run.

The late goal sealed City's 2-1 win over AmaZulu as the Citizens reached the semifinals for the first time since they clinched the MTN8 title in 2018 under McCarthy.

Meanwhile Mamelodi Sundowns have been drawn against Golden Arrows in the first semi-finals of the MTN8 and the second semi-final will see Swallows FC take on Cape Town City.