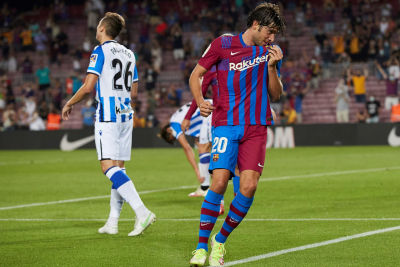 Barcelona won their first LaLiga match of the post-Lionel Messi era with a 4-2 victory that saw Real Sociedad mount a late rally.

Their season-opening match at Camp Nou comes after a drama-filled week that saw club legend Messi join Paris Saint-Germain on a free transfer.

Gerard Pique scored Barca's first goal on the night with a close-range header from Memphis Depay's free kick delivery in the 19th minute.

Martin Braithwaite doubled Barca's lead just seconds before half-time with a back-post header off a delivery from Frenkie de Jong.

Braithwaite made it two on the night for him when he scored in the 59th minute after goalkeeper Alex Remiro palmed the ball into the path of the Danish striker.

La Real pulled one back in the 82nd minute when Julen Lobete scored, with Mikel Oyarzabal scoring three minutes later to cut Barca's lead to one. However, Sergio Roberto scored in the waning moments to secure the three points.

Argentine forward Angel Correa scored in each half for Atletico, smashing in the opener into the top corner and then finishing off a slick counter-attack.

Iago Aspas had levelled for Celta from the penalty spot and should have gained a point late on for the hosts.

Aspas went round goalkeeper Jan Oblak but fired into the side-netting with the goal gaping.

An ill-tempered contest saw two red cards given in injury-time to Celta's Hugo Mallo and Atletico's Mario Hermoso for a fracas, as well as eight yellow cards during the game.

England international Kieran Trippier, who has been heavily linked with a move to Manchester United and Arsenal, appeared as a second-half substitute for Atletico, replacing Koke on 66 minutes.

City rivals Real Madrid, who finished second last season, started the season with a comfortable 4-1 win at Alaves on Saturday.

More in this category: « MTN8 semi-final fixtures confirmed: Sundowns face Arrows while City take on Swallows. Federer announces he will be out for 'many months' as he prepares to undergo knee surgery. »
back to top