Mngqithi calls for VAR introduction? Is the PSL ready for VAR? 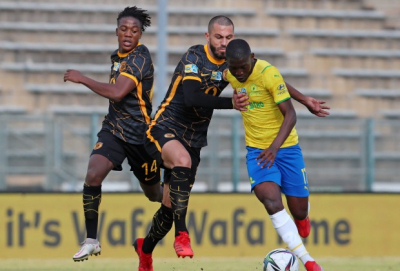 The semi-finals of the 2021 MTN8 have been confirmed after Golden Arrows, Swallows, Mamelodi Sundowns and Cape Town City FC all advanced to the last four of the knockout competition.

However Zakhele Siwela has been praised as one of the best assistant referees in the country,but Sunday’s performance in the MTN8 quarterfinal between Mamelodi Sundowns and Kaizer Chiefs saw him miss an opportunity to earn more respect and confidence.

Siwela failed to award Downs a goal in the penalty shoot-out, when Lyle Lakay’s effort had clearly crossed the line, and also failed to spot Sundowns goalkeeper Kennedy Mweene coming off his line for all four of the penalties that the Zambian saved, as Sundowns beat Chiefs 2-1 on penalties in a bizarre shoot-out.

Here's Itumeleng Khune's penalty save in the shootout that everyone's talking about, with the ball having crossed the line, which ultimately led to a red card for Sundowns coach Wendell Robinson.#MTN8 pic.twitter.com/uSonnSKGZG— SuperSport ? (@SuperSportTV) August 15, 2021

You've been asking for the pictures of Kennedy Mweene's four penalty saves, here they are ?#MTN8 pic.twitter.com/zFhSw1746V— SuperSport ? (@SuperSportTV) August 15, 2021

Sundowns' head coach, Manqoba Mngqithi, has called for the use of the VAR following their controversial penalty shootout against Chiefs.

"The need for VAR is there, it makes a lot of difference. They sometimes also make mistakes but in this case,Zakhele was there. What is the use of bringing the assistant referee into that area if he is not going to be able to tell the referee if it is a goal?

"The assistant referee was close to the situation there, unlike when he was on the touchline, but it still went on. I also believe that we had a penalty call in the second half but we also have to accept that people make mistakes and we also make mistakes. But on the penalty, I’m sure when they looked at the video, they realised that we were not shouting at them for nothing because they made a mistake. But that’s football,"said Mngqithi.

He had something to smile about, at least, as Sundowns reached the MTN8 semifinals for the second season running.

This trophy has been one Sundowns have failed to get their hands on for 14 years – even under Pitso Mosimane they found themselves wanting.

Mngqithi hopes for better fortune this time around – they will face Golden Arrows in the semifinals and PSL has yet to confirm the dates of the first leg.

Meanwhile chairman of the Premier Soccer League (PSL) Dr Irvin Khoza previously gave some explanations on what has hindered the introduction of VAR.

"There is a study that has been undertaken in that regard, but that you can do in conjunction with SAFA because they control the referees.

"But we have undertaken the study ourselves as the PSL as to whether to introduce it now but there are constraints, especially on venues that are not controlled by us as the PSL, they are controlled by municipalities," he said.

"Also the suitability of the venues for that VAR because if you do that it might be for old facilities because the way PSL games are played, you cannot be selective. The cost implications also is a factor, because there is royalty that you pay every year, while the service has been installed already.

"But more importantly is the suitability of the venues, in installing VAR," he concluded.