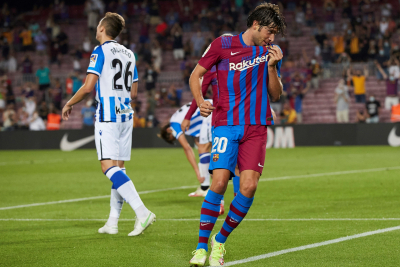 The club's wage bill currently accounts for 103% of total income.

Laporta blames predecessor Josep Maria Bartomeu for the debt, accusing him of leaving a "terrible inheritance".

Extending Lionel Messi's contract would have made the wage bill accountable for 110% of revenue, which La Liga refused to accept.

Messi announced an emotional exit from the Nou Camp last week and signed for Paris Saint-Germain on a two year contract.

"Our salaries represent 103% of the club's total income, that's 20-25% more than our competitors," said Laporta, now in his second term as president after winning March's election.

"The first thing we had to do when we arrived was to ask for a loan of 80m euros because, otherwise, we could not pay the salaries. The previous regime was full of lies.

"Barcelona has a negative net worth of 451m euros - it is a terrible inheritance. What has been happening is very worrying."

Bartomeu defended himself in an open letter released on Saturday, claiming financial measures he would have put in place had he not been forced to resign in October would have allowed Messi to stay at Barcelona.

"As is known, our board of directors planned to call elections on 21 March, within the statutory period at the end of our mandate, which would have allowed us to take on and carry out the settlement of the 2020-21 season accounts," Bartomeu said.

"We would then have taken the decisions necessary to avoid arriving at the current financial situation.

"We would have been the only ones responsible for the closure [due to the pandemic] and its consequences, a decision that the new board has not taken throughout these past months, making clear their inaction."

Laporta described Bartomeu's letter as "an effort to justify management that is unjustifiable" and "an exercise in desperation", adding: "They will not escape their doing."

New signings Memphis Depay, Eric Garcia and Rey Manaj were only able to be registered by La Liga after defender Gerard Pique agreed to a wage cut to comply with salary cap rules.

Meanwhile Belgian international goalkeeper Thibaut Courtois has signed a new five-year contract at Real Madrid, extending his stay at the Bernabeu until June 2026.

Courtois, 29, has been with the Spanish club since 2018 when he arrived from Chelsea in a deal worth up to £35m.

He has now targeted more silverware with Real after committing his future.

"This is going to be my fourth season at the club of my dreams," Courtois wrote on his website.

"It's an honour to have the opportunity to play for all these trophies. Personally, I hope to maintain and surpass the level I reached last season."

Courtois, who played his 100th La Liga game for Real in Saturday's 4-1 win over Alaves, added: "This extension is a reward for my efforts over the past year. It encourages me to work even harder and give my all to the best club in the world."

More in this category: « Mngqithi calls for VAR introduction? Is the PSL ready for VAR? England bowled out for 120 as rampant India win thrilling second Test at Lords. »
back to top