Osaka broke down in tears during her first press conference since French Open. 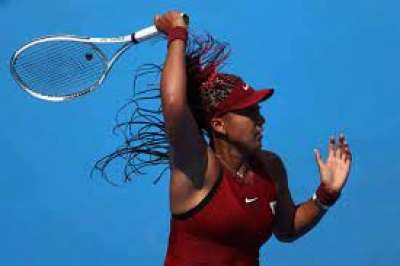 Naomi Osaka broke down in tears before resuming her first news conference since the controversy over refusing to speak to media at the French Open.

Osaka became emotional shortly after being asked about "dealing with media in this format" - and the Cincinnati Masters video call was briefly halted.

Earlier, the Japanese star, 23, said she was "proud" of the stand she took in Paris.

"It was something that needed to be done," she said.

At May's French Open, four-time Grand Slam winner Osaka said she would not do news conferences to protect her mental health.

She went on to pull out of the event and missed Wimbledon to take a break from tennis, having experienced anxiety and depression.

Osaka returned to play at her home Olympics in Tokyo, where she lit the flame at the opening ceremony before going on to lose in the third round.

At Tuesday's conference everything had initially gone smoothly, before Cincinnati Enquirer columnist Paul Daugherty asked how she balanced the benefits of a big media profile with not talking to them.

Osaka sought clarity around what he was asking and the pair had a calm exchange before the player began to cry as questions about tennis from another reporter were asked.

The conference was briefly stopped to allow her to compose herself, and Osaka returned to respond to the question she was asked in English before fielding more questions in Japanese.

At the French Open, Osaka was fined $15,000 (£10,570) for not taking part in a news conference following her first-round match at Roland Garros.

Grand Slam organisers said she could face expulsion from the tournament should she refuse to take part in media duties.

But the player withdrew the following day, saying she needed to "protect her mental health".

In the Cincinnati conference, she added: "It felt like something I needed to do for myself. I felt like I holed up in my house for a couple of weeks and was a little bit embarrassed to go out.

"The biggest eye-opener was going to the Olympics and having other athletes come up to me and say they were really glad I did what I did."

"I sent her [Biles] a message but I also wanted to give her space because I know how overwhelming it can feel," added Osaka.