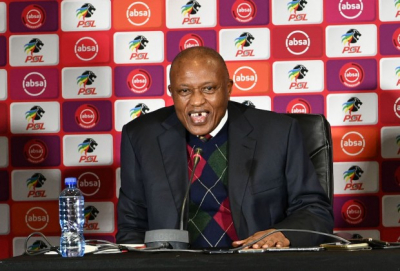 Khoza was speaking in the press conference officially announcing the sad demise of Bloemfontein Celtic in that club's sale to Royal AM.

The PSL chairman said the discussion between the SA Football Association (Safa), the employers of the referees, and the league was ongoing but nothing had been finalised as they were still looking at the costs of setting up VAR.

However, amidst the uproar, Khoza has warned supporters to temper their expectations as it's not something that can be brought into the game at a click of a finger whilst the potential costs will need to be assessed too.

"There are certain elements of the VAR system, one of them are the video assistant referee, virtual offside line and goal-line technology. Now is the issue of phasing it, which comes first," Khoza said.

"Is there issues with goal-line problems we need to address first or is if off-sides? But like I said last time it's a question of doing an audit about the infrastructure. If this VAR is going to be centrally controlled or decentralised.

"There was a discussion about it, obviously in the next joint committee meeting because the issues with referees reside with SAFA but there's a cost factor that foes with it which must be factored into the discussion."

Khoza admitted that it holds incredible benefits to the PSL to implement the modern technology and will surely address some of the heated debates that arise from officiating in South African football but also pointed out that it's not without its negatives too - as complaints about the off-side rulings in Europe have become common practice.

"It's a good thing to do in enhancing the product and making sure that technically we are sound and make sure that people are satisfied although some people are not satisfied in Europe [about VAR] because when you see the millimetres judgement of the offside line, the naked eye can't see, it gets people irritated sometimes," Khoza explained.

"But it's a reality to eradicate dissatisfactions, everyone can see TMO in rugby does that, they show you all different angles before a call is made, which is also good for supporters to be satisfied with decisions. That's why there are no fights in the stands, there are no fights on social media about decisions.

"We've welcomed [the idea] already but we are trying to do the litigations of the cost factor and the implementation phase about how to go about it to make sure that it becomes a reality. All the innovations we've made to be up there with the rest of the world, especially Northern Europe."

More in this category: « Roma sign striker Tammy Abraham from Chelsea for £34m on five-year deal. 2022 Africa Cup of Nations draw:Algeria to battle Ivory Coast, Mali to meet Tunisia. »
back to top