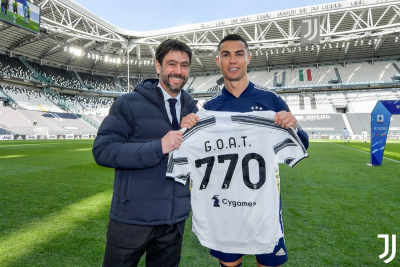 The Juventus forward, 36, has 10 months remaining on his contract in Turin and has been linked with Real, Paris Saint-Germain and Manchester City.

But in a rare move, Ancelotti responded to the rumours in a tweet on Tuesday.

"Cristiano is a Real Madrid legend and he has all my love and respect. I have never considered signing him. We look forward. #HalaMadrid," he wrote.

Ancelotti's tweet appears to have been prompted by a report by Spanish TV show El Chiringuito, which claimed on Monday night that a reunion between Real and Ronaldo was a possibility, three years after he left the club to sign for Juventus in a £99.2m deal.

Ronaldo joined Real from Manchester United in July 2009 and went on to score a club record 450 goals in 438 games over the following nine seasons.

Speculation over Ronaldo's future has intensified in the days since great rival Lionel Messi left Barcelona and joined PSG on a two year deal.

Meanwhile Ronaldo has criticised media reports linking him with a move away from Juventus.

In a post on social media he did not outright deny a move was possible or commit his future to the Italian side.

But the 36-year-old forward said he was "focused on his work" despite reports linking him with Real Madrid, Paris Saint-Germain and Manchester City.

The Portugal captain called rumours "a disrespect for me as a man and as a player".

He added: "Less talk and more action, this has been my guiding motto since the start of my career.

"However, in view of everything that's been said and written recently, I have to set out my position.

"The frivolous way that my future is covered in the media is disrespectful to all the clubs involved in these rumours, as well as to their players and staff."