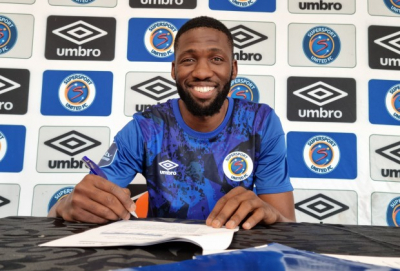 SuperSport United have confirmed the arrival of experienced defender Buhle Mkhwanazi, who has joined the side days before the start of their DStv Premiership campaign.

The former Bafana Bafana centre-back has been without a club since the sale of BidVest wits at the end of last season, having opted not to join the new owners at Tshakhuma Tsha Madzivhandila.

The 31-year-old is hoping to make up for lost time with Matsatsantsa.

"It feels good to join a team like SuperSport, I have always wanted to play for the club and the thing that made the decision easier was how the team is run, the trophies they have won the competitiveness of the team," Mkhwanazi said.

"It was not an easy one, I have been through a lot but I have learnt a lot of things. I have grown as a footballer and a man. How to tackle things when they are not going well.

"I can’t wait to see the fans, and surely they will enjoy what I am adding to the team. They should expect great things. "Mkhwanazi could make his debut for the club against Cape Town City on Saturday.

He has previously played for Mamelodi Sundowns, University of Pretoria and Wits, who he helped to the league title in the 2016/17 season.

More in this category: « Japanese Grand Prix cancelled for 2021 due to ongoing Covid-19 surge. Richard Glover to step down as Tennis South Africa CEO. »
back to top