Naomi Osaka admits she felt ungrateful in her attitude towards playing tennis. 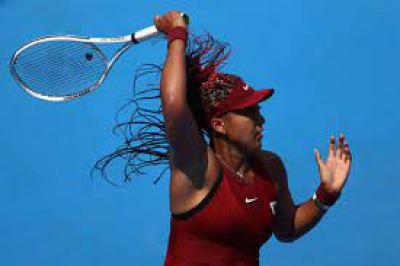 Naomi Osaka says she felt "ungrateful" at points during the last year for being unable to appreciate her success.

The world number two was speaking after beating American teenager Coco Gauff at the Cincinnati Open on Wednesday.

She also discussed her reasons for withdrawing from the French Open in May, having said on the eve of that tournament that speaking to the media was damaging her mental health.

"I wonder what affected me... made me not want to do media?" she said.

"I'm wondering if I was scared because sometimes I would see headlines of players losing and then the headline the next day would be like 'a collapse' or 'they're not that great anymore'."

She added: "The choice to go out there and play, to go see fans, the people that are coming out and watching you play, that itself is an accomplishment and I'm not sure when along the way I started desensitising that.

"It started not being an accomplishment for me so I felt like I was very ungrateful on that fact."

The 23-year-old Japanese also pulled out of Wimbledon to take a break from tennis, having experienced anxiety and depression.

She returned to play at her home Olympics in Tokyo, where she lit the flame at the opening ceremony before going on to lose in the third round.

Cincinnati is her first tournament since Tokyo and on Monday she became tearful at one point during her first news conference since the controversy over refusing to speak to media at Roland Garros.

Osaka thinks the Covid-19 pandemic might also have been a factor in her mental health issues and says recent world events have given her a fresh perspective.

"I think definitely this whole Covid thing was really stressful with the bubbles and not seeing people and not having the interactions.

"But seeing the state of the world, how everything is in Haiti [her father's homeland, which has been hit by an earthquake and tropical storm in recent days] and Afghanistan right now is definitely really crazy, and for me to just be hitting a tennis ball in the United States right now and have people come and watch me play is... I would want to be myself in this situation rather than anyone else in the world."

Elsewhere, Britain's Heather Watson was knocked out in the second round by Australian world number one Ashleigh Barty.

Osaka will face Swiss Jill Teichmann for a spot in the quarter-finals.

More in this category: « Defending champion Dominic Thiem to miss US Open and rest of 2021 season. Condolences continue to pour in as Gary Player pays tribute to his wife. »
back to top