We will fight with dignity, promises Pitso Mosimane. 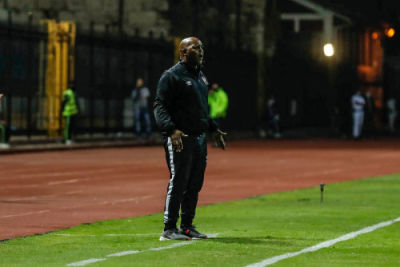 Al Ahly head coach Pitso Mosimane promised that the team will keep fighting for the Egyptian Premier League title despite the difficulty of their situation.

The Reds were held to a null draw by El-Gaish on Tuesday, which put their league title hopes in jeopardy and neared Zamalek to their 13th league title.

Pitso‘s men now need to win all their remaining three games, with Zamalek dropping four points from their next possible nine in order to clinch the title.

While the mission seems nearly impossible for the Red Devils, Mosimane promises to keep fighting until the end of the season and shared his optimism in this Twitter post:

We have hit a big turbulence as a team, but we will fight with dignity until to the end.Everything happens for a reason, maybe there are bigger things for us to come.??

Al Ahly now sit four points behind league leaders Zamalek, with just three games to go before the end of the season. They will hope their opponents drop points in their upcoming games in order to have a chance at competing.

More in this category: « Pochettino undecided on Messi's debut ahead of Friday's clash against Brest. Rugby Championship 'considers moving fixtures' to Europe amid Covid uncertainty. »
back to top