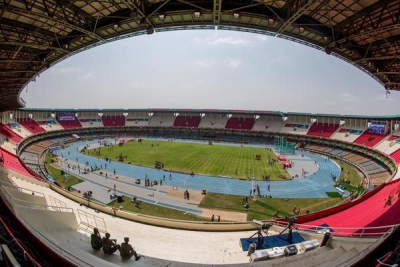 Richardson, who lined up among the favourites after displaying great form in the heats and semifinals the day before, grabbed silver in the men's 100m final.

The 17-year-old South African crossed the line in 10.28 seconds, with Letsile Tebogo of Botswana snatching the gold medal in 10.19 and Shainer Montoya of Cuba taking bronze in 10.32.

"This is a big statement that Africa is coming up and very fast in sprints races. Taking the top two positions means there is huge potential in us the youngsters. My ambition is to start preps for the World championships next year while also eyeing the Paris Games in 2024," said Richardson.

In the morning session, Christiaan Venter finished third in his 400m hurdles heat in 52.91, and Abednico Choba was fifth in his 800m heat in 1:50.20, booking their places in Saturday's semifinals.

Aviwe Hoboloshe ended fifth in her 800m heat in 2:11.65 and she was eliminated ahead of the final.

"Congratulations to Benjamin and coach for the silver medal," said James Moloi, the President of Athletics South Africa. "After the great work worth its weight in gold yesterday, the inspiration has obviously rubbed off on Benjamin today. We trust that his silver medal with now inspire the other athletes who are still in competition.

"We also congratulate the team management for the great work they are doing in making sure that our athletes as comfortable as possible so that athletes can concentrate only in being the best at competition."

After two days of competition, the SA team was lying third in the overall table with two medals (one gold and one silver).

More in this category: « Home favourite Conradie targets a win at Wingate. Jose Mourinho gets off to winning start as boss of Italian outfit. »
back to top