US coaches meet in Matchday 2 of the Bundesliga season. 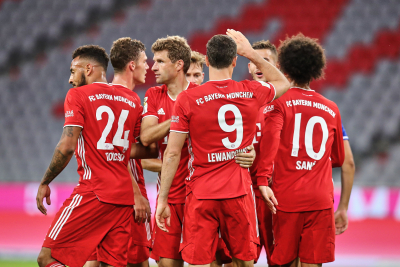 The 2021/22 Bundesliga season is underway, kick-starting in style last weekend as fans returned to stadiums. Goals were in abundance and both Robert Lewandowski and Erling Haaland got on the scoresheet.

Matchday 2 is sure to be a special weekend of action, especially for fans in North America, as two American coaches face off in the German top flight for the very first time.

RB Leipzig’s Jesse Marsch and VfB Stuttgart’s Pellegrino Matarazzo have known each other for over 20 years, having played against each other while at university in the United States. While Marsch has developed his coaching career in the US, Germany and Austria, Matarazzo has climbed through the ranks of the German system to reach the top.

On Friday night the pair will meet in the first match played between two American coaches in Bundesliga history. It also marks Marsch’s first home game in charge of Leipzig since he succeeded Julian Nagelsmann in the summer, while Matarazzo will hope Stuttgart can build on a 5-1 success against SpVgg Greuther Fürth.

Five Saturday afternoon fixtures await, with two of last season’s top four in action. Borussia Dortmund travel to SC Freiburg on the back of their 5-2 win on the opening weekend, in which Haaland – their star man in attack – scored twice and was involved in the other three goals. Christian Streich’s Black Forest side will need to stop the Norwegian if they want any chance of a win.

Meanwhile, VfL Wolfsburg travel to the capital to face Hertha BSC Berlin. It will be the homecoming game for Kevin-Prince Boateng, who is set to play his first Bundesliga home match for boyhood club Hertha since May 2007. The last time he stepped out at the famous Olympiastadion, he lifted the DFB Cup with Eintracht Frankfurt in 2018.

Elsewhere among Saturday’s early kick-offs Eintracht Frankfurt host FC Augsburg, with both sides looking to bounce back from defeats on the opening weekend. It will be a big day for fans of VfL Bochum 1848 and Greuther Fürth, with the two promoted sides set to play their first home matches in the Bundesliga for 10 and eight years respectively.

They’ll face 1. FSV Mainz 05 - who shocked Leipzig on the opening day - and Arminia DSC Bielefeld in what are set to be two close-fought matches.

On Saturday evening we head to the BayArena where Bayer Leverkusen host Borussia Mönchengladbach in what has long been an entertaining encounter in the Bundesliga. The fixture has featured 261 goals in 78 Bundesliga meetings at an average of 3.3 per game, with at least one in the previous 32.

Sunday’s double-header starts in Sinsheim as TSG 1899 Hoffenheim host 1. FC Union Berlin. The visitors will come into the game on the back of their first European fixture since 2001 - a UEFA Conference League play-off game played in Finland on Thursday.

The final game of the weekend will see the defending champions FC Bayern München run out at the Allianz Arena for the first time in 2021/22, playing host to 1. FC Köln. Lewandowski - who netted twice in Tuesday’s 3-1 DFL Supercup win over Dortmund - has scored 14 times in his last 15 meetings with the Billy Goats.

More in this category: « Team SA lights up FNB stadium to launch global disabiity campaign ahead of Paralympics. Pulisic to miss Premier League clash against Arsenal. »
back to top