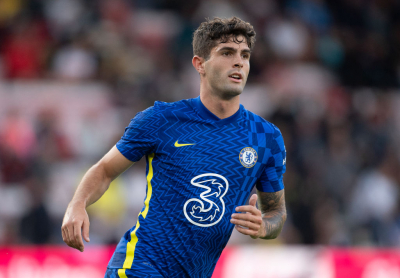 The United States international had not been training this week and Blues boss Thomas Tuchel confirmed that the midfielder was self isolating.

"He is not training or available for the game," said Tuchel.

Pulisic wrote on Instagram that he is fully vaccinated and had "no symptoms so far".

Hakim Ziyech and N'Golo Kante are both back in training and could feature in the north London derby.

"But they need another more physical, intense training session with the team.

"We can decide after that, but right now it seems very positive that both can be in the squad for Sunday."

Meanwhile Arsenal have signed midfielder Martin Odegaard from Real Madrid for a fee in the region of £30m while goalkeeper Aaron Ramsdale has completed a medical before a move from Sheffield United.

Norway international Odegaard, 22, spent the second half of last season on loan at Emirates Stadium.

He made 20 appearances in all competitions and scored two goals.

The deal for England Under-21 international Ramsdale is worth £24m plus a further £6m in add-ons.

Ramsdale, 23, who made 38 Premier League appearances for the Blades last season, will join Bernd Leno and Runar Alex Runarsson as Arsenal's goalkeepers.

"There is still some paperwork but his medical is done, still a few things to sort with Sheffield," Gunners boss Mikel Arteta said.

"Aaron is a talented young keeper with huge experience and has international experience for England. He will bring competition and that's what we want to create - healthy competition, quality competition in every position. We identified Aaron as the ideal option."

Odegaard, who has signed a four-year deal with the option of an extra year, joins Ben White, Albert Sambi Lokonga and Nuno Tavares as Arsenal's signings this summer.

He will not be available for Sunday's Premier League match with Chelsea as he waits for visa clearance.

Southampton vs Manchester United (both 1300).

More in this category: « US coaches meet in Matchday 2 of the Bundesliga season. Lionel Messi left out of PSG squad to face Brest. »
back to top