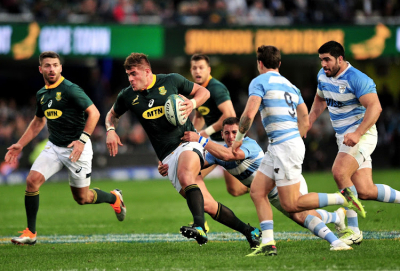 SA Rugby is prepared to host the remainder of the Rugby Championship matches in South Africa, following the cancellation of the Springboks’ scheduled fixtures in New Zealand.

Sanzaar announced overnight that the latest outbreaks of Covid-19 in Australia and New Zealand had caused massive disruption to the match schedule for the tournament following the tightening of regulations placed on travel and quarantine by various state and national governments.

New Zealand announced that the planned matches against the Springboks in Auckland and Dunedin at the end of next month had been cancelled and then, without informing their Sanzaar partners, unilaterally issued a media release announcing they would not fly their team to Perth as scheduled for a planned match against the Wallabies.

Sanzaar said it was "currently working night and day with all stakeholders, and the tournaments’ associated commercial partners and rights-holding broadcasters, to find a suitable solution for the remaining matches."

Jurie Roux, SA Rugby CEO said: "We have advised Sanzaar that we are ready and able to host the remainder of the competition in South Africa, pending our Government’s approval.

"But we are now well-versed in turning on rugby Tests within the prevailing Covid restrictions and have the venues and accommodation necessary. We just need the go-ahead."

The Springboks and Pumas were scheduled to fly to Australia on Sunday night but that flight has been put on hold until a new schedule for the tournament is confirmed.

Sanzaar is considering a range of options – including the hosting of the event in South Africa – and would make an announcement once all logistical, commercial, and broadcasting considerations had been taken into account.

Saturday’s match between the Boks and Pumas at the Nelson Mandela Bay Stadium is unaffected and will go ahead as scheduled. Kick-off is 17h05.

More in this category: « Rafael Nadal ends 2021 tennis season early because of niggling foot injury. Maduka looking forward to the start of their debut season. »
back to top