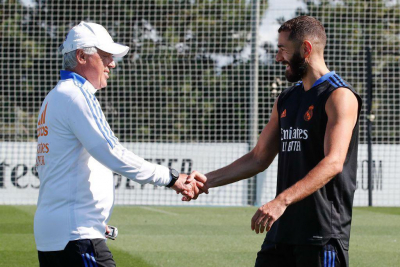 Club captain Karim Benzema has signed a one-year contract extension with Real Madrid keeping him at the Bernabeu until 2023.

The deal will take the striker into his 14th year with the Spanish club.

Benzema, 33, arrived at the Bernabeu in 2009 and has scored 281 goals in his 12-year spell, including more than 20 goals in each of the past three La Liga seasons.

The France international is the club's fifth-highest goalscorer of all time.

He has started the current campaign in fine form, scoring twice in Real's opening-day 4-1 victory over Alaves last week.

Benzema returned to the French national team for the delayed Euro 2020 this summer, scoring four times, and remains a pivotal figure at club level under Carlo Ancelotti.

His renewal follows that of Belgium goalkeeper Thibaut Courtois, who signed a new five year contract with the club earlier this week to extend his stay until June 2026.

More in this category: « Maduka looking forward to the start of their debut season. Zwane's penalty gives Mamelodi Sundowns winning start against AmaZulu. »
back to top