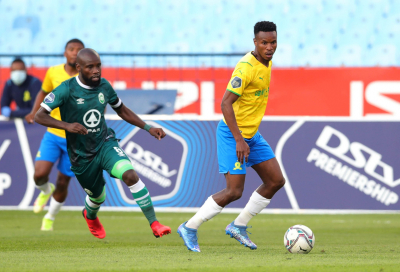 Mamelodi Sundowns got their title defence off to a winning start with a 1-0 victory over AmaZulu in the opening game of the 2021/22 DStv Premiership season at Loftus Versfeld Stadium in Tshwane on Friday.

Themba Zwane scored the only goal of the match on the cusp of half-time to lead the Brazilians to all three points and to the top of the league standings.

After a delay in play due to Kennedy Mweene having to rush to the changing rooms for unspecified reasons, the game got off to a rather flat start as has often been the case in season openers.

Sundowns started this match with the same starting line-up that defeated Kaizer Chiefs in the quarter-final of the MTN8 via the lottery of penalties, while AmaZulu had three changes to the team that lost to Cape Town City in the MTN 8.

In the opening stages of the game, the champions dominated the lion’s share of possession with their build up. But that wasn’t effective, given that Usuthu closed the pockets of spaces in their own half and were quick to come out of the blocks.

Haashim Domingo, though, will feel that he should have found an early breakthrough for the Brazilians after his half volley from outside the box unceremoniously sailed wide of goal.

Sundowns were finally up and running three minutes to halftime when Zwane sent goalkeeper Veli Mothwa the wrong way from the penalty spot after Thembela Sikhakhane fouled Peter Shalulile.

Benni McCarthy fired up his troops at half-time and AmaZulu came out firing after the break with Tapelo Xoki heading inches wide two minutes into the half.

AmaZulu continued to push for the equaliser and looked sure to score following a defensive mix-up in the Sundowns penalty area, but Rushine de Reuck pulled off a superb last-ditch tackle to deny Lehlohonolo Majoro from point-blank range to spare his team's blushes.

The Brazilians managed the rest of the encounter successfully well to start their league campaign on a winning note.

More in this category: « Karim Benzema signs new contract extension with Real Madrid. The study that blocked Caster Semenya from Tokyo Olympics has been corrected. »
back to top