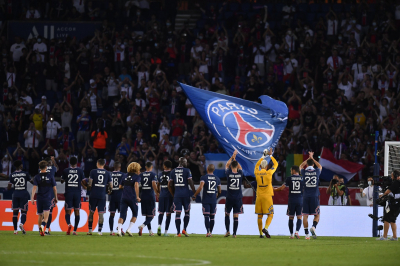 Paris St-Germain were without a number of star players, including new signing Lionel Messi and Neymar, but still had too much for Brest as they made it three wins out of three to top Ligue 1.

Ander Herrera's volley and a Kylian Mbappe header put PSG in control before Franck Honorat pulled one back.

Idrissa Gueye fired in from way out, but Brest refused to lie down with Steve Mounie side-footing in.

Substitute Angel di Maria decided the contest for good with a neat lob.

Six-time Ballon d'Or winner Messi is yet to feature for PSG after joining from Barcelona earlier this month.

Both the 34-year-old and fellow forward Neymar started pre-season training late after an extended break following the Copa America, in which Messi's Argentina beat his club-mate's Brazil 1-0 in the final in Rio on July 11.

Also absent was another summer signing, defender Sergio Ramos, while European Championship-winning Italian goalkeeper Gianluigi Donnarumma was on the bench.

Such is the frightening level of talent available to PSG boss Mauricio Pochettino, his starting XI still included a host of internationals, including Mbappe, Achraf Hakimi, Giorginio Wijnaldum and Marco Verratti.

Italian Verratti should have scored from close range in the first half before Herrera showed him the way with his brilliantly-executed finish from outside the box.

PSG looked to be pulling away when Mbappe latched on to a loose ball to head in but Honorat was set up to fire in on the break as Brest kept the result in the balance.

The best goal of the lot came from Gueye, who picked the ball up midway inside the Brest half and firing a dipping effort into the bottom corner - just his fourth PSG goal in 79 games.

It takes Mauricio Pochettino's side to nine points, three more than Angers and Clermont, both of whom play their own third game of the league season on Sunday.

Pochettino said there was still work to be done in order to make sure his side amounted to the sum of talented parts.

"We have a unit full of shining names and the main challenge is to gel them into a unit so that everyone is at the team's service," the Argentine told a news conference.

"It's difficult, you need work to get a strong team. We struggled a bit in the closing stages but I am happy that we came away with three points against a very good team."

Pochettino added: "This week has been very good for Leo. We hope the next week he can make it to the team."

More in this category: « The study that blocked Caster Semenya from Tokyo Olympics has been corrected. SA bags two more medals at the World U20 Athlectics. »
back to top