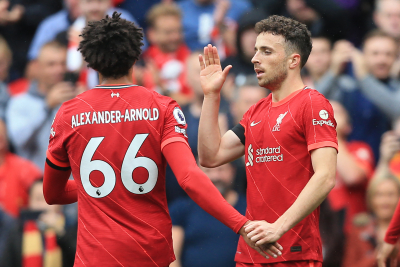 Liverpool's first home game of the season ended in a 2-0 win over Burnley on Saturday, with Diogo Jota and Sadio Mane on target.

In front of a packed Anfield for the first time in 17 months, Jurgen Klopp's side followed up last week's 3-0 win at Norwich with another three points, against a spirited but ultimately blunt Burnley side.

Jota, who scored at Carrow Road last week, nodded in the opening goal on 18 minutes and Burnley never really looked like finding a way back into the match. Mane made it 2-0 on 68 minutes to inflict another defeat on Sean Dyche's side, who have begun the campaign with back-to-back defeats.

Burnley won at Liverpool last season as Klopp's men tasted defeat at home for the first time in 68 matches but Liverpool have not lost their opening home match of a season for 18 years and they never looked like ending that run here.

Liverpool, unbeaten in 12 matches in a run that stretches back to the end of last season, were slow to start but eventually found their rhythm, going ahead when Jota's neat header from Kostas Tsimikas' cross beat Nick Pope in the Burnley goal. Moments earlier, Burnley's Chris Wood had a header of his own at goal that Allison kept out.

The opener did not deter Burnley, though, with Dwight McNeil particularly lively down the wing for Dyche's side. But they breathed a sigh of relief eight minutes after Jota's opener when Mohammed Salah tucked home, only for VAR to correctly rule it out for offside.

James Tarkowski then beat Allison to a high ball on the edge of the box but Liverpool escaped as the ball bounced wide on the stroke of half time. Burnley's Ashley Barnes had the ball in the back of the net soon after the restart but once again, it was rightly ruled out for offside.

Salah almost made it 2-0 just before the hour mark but his low effort was blocked by McNeil, before Pope kept out Mane's drive inside the box. Mane was not to be denied a second time, though, as he was afforded far too much space inside the box and he made no mistake, slamming home the second and ending any hope of a Burnley comeback.