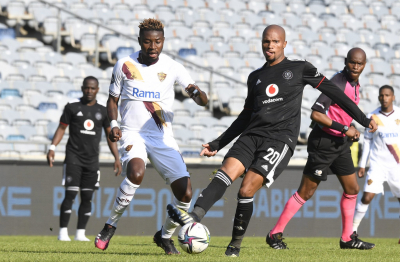 Orlando Pirates were held to a 2-2 draw by Stellenbosch FC in their DStv Premiership opener at Orlando Stadium on Saturday.

Happy Jele, Gabadinho Mhango and debutants Goodman Mosele and Bandile Shandu came into the Pirates side, with Mandla Ncikazi and Fadlu Davids in the dugout after Josef Zinnbauer's departure.

Stellenbosch got off to a dream start, claiming the lead in just the second minute. The visitors pushed forward in midfield and Junior Mendieta laid the ball off to returning attacker Waseem Isaacs, whose shot from just outside the penalty area took a wicked deflection off Thulani Hlatshwayo and beat goalkeeper Richard Ofori at his near post.

Pirates took time to find their feet in the game, but they soon began to boss possession and were rewarded with a brilliant equaliser on 18 minutes.

Deon Hotto scored with a superb shot direct from a free kick, curling the ball over the defensive wall and into the top corner, with goalkeeper Lee Langeveldt doing well just to get fingertips on the shot.

Pirates had momentum on their side, but on 41 minutes they were reduced to 10 men when Ntsikelelo Nyauza was deservedly shown a straight red card, having both elbowed Ashley Du Preez in a challenge on the by-line and then aimed a stomp downward at the same player rather than hurdling him.

The hosts introduced Vincent Pule off the bench at the start of the second half and he needed just four minutes to make an impact, flicking on a corner kick which was then headed home at the back post by Goodman Mosele to make it 2-1 to 10-man Bucs.

Stellies responded with a double change, one of which was striker Judas Moseamedi.

The former Cape Town City and Maritzburg United man marked his Stellies debut with a poacher’s goal to make it 2-2 on 55 minutes, bravely diving ahead of Hlatshwayo to meet Dean Van Rooyen’s cross and score with a glancing header.

The visitors, with their numerical advantage, naturally enjoyed most of the possession in what remained of the game, but struggled to create clear-cut chances, with their most notable effort a shot from a free kick by Nathan Sinkala which passed through the wall and forced an awkward save from Ofori in the 81st minute.

The teams will return to DStv Premiership action this coming midweek, with Pirates away to Marumo Gallants on Tuesday, 24 August and Stellenbosch at home to TS Galaxy on Wednesday, 25 August.

Meanwhile Golden Arrows began their DStv Premiership campaign with a 2-1 win over Provincial rivals Maritzburg United in a KwaZulu Natal derby at the Princess Magogo Stadium in Kwa-Mashu on Saturday afternoon.