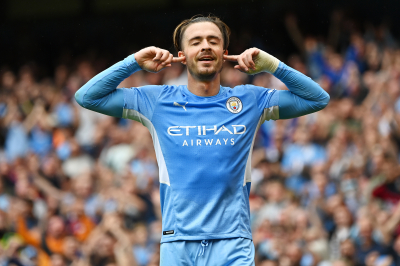 Shaking off three successive defeats bridging this season and last, Pep Guardiola's side assumed complete control from minute one against the outmatched Canaries.

There was some fortune about their first two goals - both set up by low Gabriel Jesus crosses - as Grant Hanley's attempted clearance flew in off Norwich keeper Tim Krul before City's second bounced in off Grealish's knee.

However, the lead was just reward for the imperious hosts, who saw a neat Ferran Torres finish chalked off in-between those goals after the video assistant referee noticed Bernardo Silva's clip on Milot Rashica in the build-up.

Aymeric Laporte added the third, steering home a corner from close range, before Jesus capped a impressive and unselfish performance by guiding Kyle Walker's through ball across the face of the six-yard box for substitute Raheem Sterling to sweep home City's fourth.

Riyad Mahrez also came off the bench to round off the rout, beating Krul one-on-one to hand Norwich successive 5-0 defeats at Etihad Stadium, having lost there by the same score on their previous visit in July 2020.

Meanwhile Raphinha came to Leeds' rescue with a superb curling finish to rescue a point against Everton in the club's first home Premier League game with a full stadium in 17 years.

The Brazilian, who scored home and away against the Toffees last season, struck with 18 minutes remaining of a pulsating, ferocious and closely contested match played out to near constant noise from the stands.

Leeds had been behind twice, with Dominic Calvert-Lewin giving Everton a first-half lead with a penalty awarded via VAR and a low finish on the turn from the excellent Demarai Gray early in the second.

Mateusz Klich restored parity the first time courtesy of a dinked finish and Raphinha ensured a point apiece with his brilliant strike.

Leeds were the better side for much of the contest, roared on at every opportunity by 36,293 fans, making the most of being together in the ground for the first time in 532 days.

But Everton were a threat throughout and would have possibly put the game to bed by making it 3-1 had Illan Meslier not produced a superb save to deny Calvert-Lewin a second from close range.

Elsewhere Brentford maintained an unbeaten start to their first Premier League season with a goalless draw against Crystal Palace at Selhurst Park.

Southampton vs Manchester United (both 1300).

More in this category: « Ten-man Pirates drop points while Chippa give Hunt a winning start. Sharks crush Lions to cruise into semi-finals. »
back to top