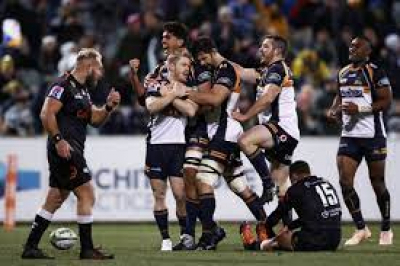 The Sharks booked their place in the Currie Cup semi-finals with a 56-14 thrashing of the Lions at Ellis Park on Saturday.

The result moved the second-placed Sharks to 40 points on the log, a near-unassailable position as the third-placed Pumas are on 32 points with one game to play.

Meanwhile, the Lions finished their season on a low with the seventh loss of the season, which condemned them to finish as the competition’s wooden spoonists. There has been talk of big changes happening to the management of the Johannesburg side and surely that has to happen sooner rather than later.

After a scrappy first 20 minutes, the Sharks took an early lead thanks to a try from inside centre Marius Louw. However, the Durban side then stepped up the intensity and the Lions struggled to keep up.

First, Thaakir Abrahams finished off after a brilliant break from scrumhalf Grant Williams and then Phepsi Buthelezi was on hand to score and punish the Lions for a yellow card to hooker PJ Botha.

The only area where the Lions were getting any dominance was the scrum but, even then, the Sharks managed to keep those to a minimum.

The Sharks sealed the bonus point just before the break as Anthony Volmink scored in the corner, but the Lions could count themselves fortunate not to have PJ Botha red-carded for a high tackle on the Sharks fullback just as he scored.

This pattern largely continued in the second half as, just as it seemed the Lions would get themselves in when Emmanuel Tshituka reached out for the tryline, the flank was adjudged to have grounded the ball short and the Sharks went up the other end and extended their lead through Abrahams’ second try.

As the Sharks started to tire, the Lions were able to get themselves on the board through tries from Tshituka and Jaco Visagie. However,  that would be a consolation as Sanele Nohamba dotted down for the Sharks, before Abrahams grabbed his third try and then set up Volmink to bring up the half century of points.

Elsewhere the New Nation Pumas claimed a vitally important 28-19 (halftime 18-7) win over the Toyota Cheetahs in their Carling Currie Cup clash at the Mbombela Stadium in Nelspruit on Saturday afternoon.

The result moves the Pumas up to third on the log on 32 points, giving them a great chance of making the competition semifinals during the final pool round next weekend, while the Cheetahs chances of making the knock outs have basically disappeared with them needing other results to go their way to have any chance.

More in this category: « Grealish nets on Manchester City home debut while Palace held by Brentford. Dortmund surprised by Freiburg as Haaland draws a blank. »
back to top