Dortmund surprised by Freiburg as Haaland draws a blank. 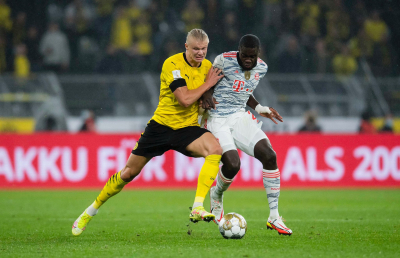 Jude Bellingham played a part in a Borussia Dortmund goal and hit the post but could not stop them slipping to a Bundesliga defeat at Freiburg.

Outstanding goals early in each half from Vincenzo Grifo and Roland Sallai gave the home side control but Dortmund had hope when Bellingham's volley went in off Yannik Keitel for an own goal.

The visitors controlled possession but lacked cutting edge in the final third.

Dortmund had equalled the club record of eight successive league wins with victory over Eintracht Frankfurt in the season opener but rarely looked like breaking the record here.

Their best chance to equalise fell to the usually clinical Erling Braut Haaland, but he spooned over when clean through.

This defeat caps a disappointing week for Dortmund, who also lost in the German Super Cup to Bayern Munich in midweek.

Elsewhere, Wolfsburg went top of the standings by coming back from a goal down to beat Hertha Berlin 2-1, with Lukas Nmecha getting the winner in the 88th minute.

Bochum forward Simon Zoller set up a goal in each half as his side beat Mainz 2-0, and Greuther Furth came back from a goal down to grab a point against 10-man Arminia Bielefeld, while Eitracht Frankfurt and Augsburg played out a scoreless draw.

More in this category: « Sharks crush Lions to cruise into semi-finals. Springboks overcome ill-disciplined Argentina in scrappy Rugby Championship win. »
back to top