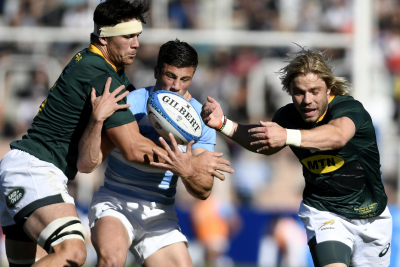 The Springboks continued their unbeaten run in the Rugby Championship as they overpowered Argentina to claim a 29-10 victory in Gqeberha on Saturday.

The victory edged the Springboks to the top of the Rugby Championship table amid still so many questions around the future of the 2021 season.

South Africa were also able to equal their record unbeaten run in the competition, having last gone on a five-match winning run between 2008 and 2009.

The best teams in the world set a standard and demand those who wear the jersey to maintain that standard. The Springboks, in the final 10 minutes against Argentina, were awful.

The Springboks, in scoring two tries to nil, led 29-3, after 70 minutes. They controlled the game and were comfortable in field positon and in territory. The had so many opportunities to score the bonus-point third try and they fluffed their lines every time.

However, a closer look to the circumstance does not have a similar softening.

Handre Pollard missed a penalty kick to the corner on 75 minutes. It was a basic error from one of the best No 10s in the world. His legs were tired and there wasn’t another No 10 insurance policy on the bench. Pollard is better than that type of mistake. He knows it. His coaches know it and that is all that matters.

The Springboks,despite this mistake, had two more opportunities to score the third try and complete a 30-plus point win. They again got it wrong at the lineout, within 20 metres of the Pumas tryline. They conceded an attacking drive and they lost another opportunity, and it was Argentina who scored in the 86th minute of the Test, very much against he run of play.

Always take the win, enjoy the win and celebrate the win, but the final 10 minutes of this particular contest detracted from a Bok two-Test dominance.

Argentina never looked like scoring in 165 minutes. The fact that they did score, albeit in the 166th minute of the two Tests, gives any team that plays the Boks belief.

The win sees South Africa take a four-point lead over New Zealand in the Rugby Championship.

New Zealand has imposed a snap lockdown and the All Blacks have withdrawn from next Saturday's Bledisloe Cup match with Australia, as well as cancelling two home Rugby Championship meetings with South Africa.

More in this category: « Dortmund surprised by Freiburg as Haaland draws a blank. Ashleigh Barty wins battle of Slam champions to reach Cincy final. »
back to top