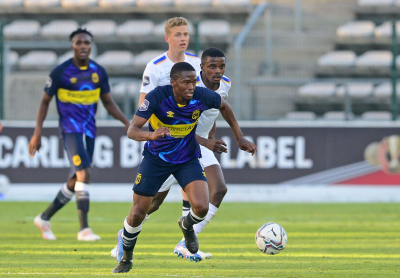 Cape Town City and SuperSport United earned their first point of the 2021/22 DStv Premiership season after playing to a 0-0 draw in their season’s opening match at Athlone Stadium in Cape Town.

City made a great start to the game with Douglas Mapfumo having the first attempt on goal in the fifth minute, but his long-range effort went just inches wide.

Ten minutes later United had their first sight of goal when a loose ball fell to Bradley Grobler’s feet only 14 yards out, but his snap-shot went narrowly wide.

In the 22nd minute Grobler created another scoring chance for himself after working his way into the box, but his powerful effort from just inside the box was superbly saved by Hugo Marques.

United controlled the rest of the half, but despite all their possession they were not able to create any significant opportunities in front of goal.

In the 65th minute City showed they were still a threat when Mduduzi Mdantsane found some space on the edge of the box, but his powerful shot went wide of the target.

City’s next effort on goal came in the 75th minute and was a 35-yard effort from Mapfumo which flew centimeters over the crossbar.

The home side continued to apply the pressure in the final 15 minutes of the match, but they could not break down the United defence as the match ended goalless.

More in this category: « Ashleigh Barty wins battle of Slam champions to reach Cincy final. Dzeko on target as champions Inter impress in opening day win over Genoa. »
back to top